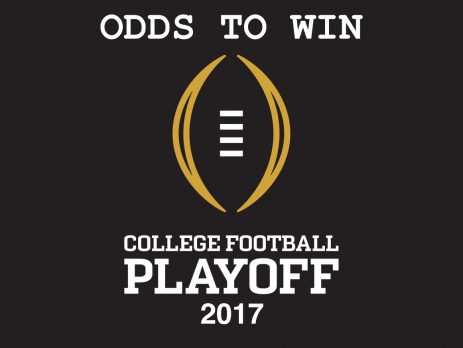 The College Football Playoffs committee issued its first official rankings on Tuesday, November 1. But that doesn’t mean we can have fun trying to see who contenders and the pretenders are after the first few weeks of competition.

The Associated Press rankings have six unbeaten teams inside the top-10. Many names are expected to be there like Alabama, Ohio State, Clemson, and Michigan. But seen Washington and Texas A&M in there is a breath of fresh air.

How far can these teams go this season is yet to be seen. For now, let’s have a look at the updated College Football betting odds to win the title:

An aggressive defense led by an experienced winning coach, along with a good running game and a capable quarterback. Nothing spectacular but of course, it has been proven to be the winning formula.

After a little slightly over a month of competition, we know exactly what Alabama is this season. The price per head services‎ will accustom their College Football betting lines knowing this is the best team in College Football until someone knocks them out. Good luck with that.

For many years Alabama has done wonderful things with just OK quarterbacks. AJ McCarron was perhaps their best during their current winning run. Now they have a double-type prototype that has become a nightmare to defend.

No one can deny the freshman QB Jalen Hurts has been outstanding over the first month of competition. Although he wasn’t supposed to start, he picked up the job in the first game of the season and didn’t look back.

Hurts’ most impressive game came on the road against Ole Miss. He completed 19 of his 31 passes for 158 yards. He didn’t throw a touchdown pass or an interception, but he was in command of the offense and the situation. Hurts added 146 yards on 18 carries. His baffling 8.1 yards per carry showed he‘s the real deal.

Of course, it helps to have a defense like the one Alabama has Year-in and Year-out. The Crimson Tide held the USC Trojans to six points in the opening weekend. West Kentucky, Kentucky, and Kent State combined for 16 points scored between the three when they faced the Champs. I get they are not top competition, but head coach Nick Saban was satisfied.

Alabama’s talent on the defensive side makes them the team to beat.  Saban’s savvy coaching style makes him the top coach in College Football. The Tide was listed 11/2 by the sports bookies to win the title before the start of the season.

Perhaps the only head coach in College Football that can compare to Nick Saban is Ohio State’s Urban Meyer. His recruiting and preparation makes Meyer one of the best in the business. What separates him from Saban and the others is his eye for the athletic talent.

Terrelle Pryor, Ezekiel Elliot, and Joey Bosa, just to name a few, are rocking the NFL right as we speak. All were Buckeyes recruited by Meyer. All have the same thing in common: an insane athleticism that’s hard to match at any position.

The pay per head sportsbook software knew Ohio State would be a good bet. The Buckeyes were 15/2 before the season started.  Their scoring and defense ratio is the best in the nation after six weeks. They average 53.2 points per game, which is the third best number in College Football. They also give up just 10.8 points every weekend; second best the NCAA-Division 1.

Yes, the toughest part of the schedule comes later, but they have dealt with the start of the season just like everybody expected.

Ohio State will know their real expectation about the season, when the meetings against Nebraska, Michigan State, and Michigan hit the calendar.  Much of their success will be in the hands of QB JT Barrett. The Junior quarterback is one of the Heisman Trophy contenders this year. His ability to make plays scrambling outside the pocket makes him a horrible matchup for the defenses. Barrett’s main issue, however, is his accuracy.

When the secondary defense sits tight and waits for him to pass the ball, his problems are very noticeable. Even so, not many defenses have the proper personnel to stop him, and that makes Ohio State a scary team moving forward.

The Clemson Tigers can’t look at the College Football rankings every week, or they will get mad.  After losing to Alabama in the Championship game last season, it’s hard to swallow to be third in the rankings with a month into the season.

The thing is Alabama, and Ohio State are proven winning programs. Clemson still is one step away.

Yet, Clemson has arguably the best player in the nation. They will go as far as QB Deshaun Watson takes them.  He will be an NFL talent next season; meaning this year is his chance to finish what he couldn’t do last year.

Watson threw over 4000-yards in 2015 and ran for another for over 1100-yards. He already has thrown for 1500-yards this season, but he hasn’t done much of the running this year.

The playing style of Clemson’s offense is trying to avoid putting him on the spot. Watson is becoming more and more of a pocket passer. When using our online bookie software, you will get to see plenty of betting line movement.

Don’t be surprised if Watson is at the top of the Heisman Trophy betting odds every week.

The Tigers 42-36 win at home over Louisville could be one of the best of the current season. They play and beat a playoffs contender team that was not afraid of the moment. Clemson fought and kept their unbeaten status.

Inside the ACC they are the team to beat.  If they manage to get in the playoffs, they will be hard to stop.