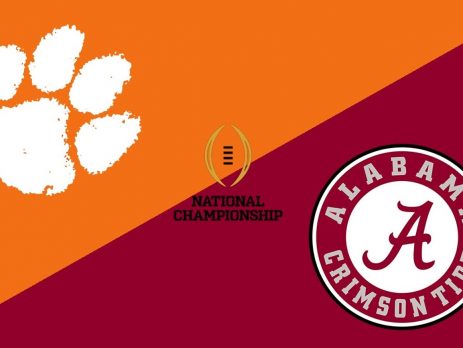 The Clemson Tigers and the Alabama Crimson Tide will clash in the College Football National Championship game for the second straight season. Bama jumps as the favorite for the sports bookies. They haven’t lost a game this season and their defense is one of the most dominant in the nation.

Bama beat Washington 24-7 in the semifinals and covered the spread as 14-point favorites. The UNDER 51.5 points hit the bank.

Clemson, on the other side, destroyed Ohio State 31-0. They covered the spread as +1.5-points underdogs. Also, the UNDER 57.0 points made an appearance.

Both picks were money in the bank for the NCAAF picks here at PricePayPerHead.com. Here are the 2017 College Football National Championship Game Predictions:

Did you see what the Clemson Tigers did to Ohio State? It was a punch in the face to all the Big Ten conference. The Buckeyes head coach Urban Meyer ended with more than just a bruised ego after the Tigers hammered them.

Clemson won’t do the same to Alabama, but the win against Ohio State confirmed they can compete with the Tide. The Tigers played toe-to-toe with Bama in the National Championship game last season. I mean they scored 40 points and loss. They have been waiting for this rematch all season.

Here’s where it get interesting for Clemson. Last season Alabama needed to score 45 points to ensure another title. Just this past week head coach Nick Saban fired offensive coordinator Lane Kiffin. Don’t let anybody tell you Kiffin stepped down. It was a decision made by Saban.

Saban also named Steve Sarkisian as the new OC. Sarkisian was a train wreck in USC just last season. I get he will be under the wing of Saban, but this is a terrible-timing for making these moves. Even for the best program in College Football, Alabama, this is a storm in the worst moment of the season.

Every time I read more and more about what happen in Alabama, I love more and more the underdog play in this game. The bookie business knows things like this are game changers, especially in the week leading for a national title battle.

Alabama Crimson Tide is the best football program in the nation, and it’s not even close. But they need to be alert to what Clemson brings on Monday. After all, beating the Tigers last season was anything but easy.

The online bookie software made the Tide favorite by a touchdown, but it quickly moved to 6.5 as the money came flying to the Tigers side.

Alabama’s first task is to stop QB Deshaun Watson. Last season Watson had a field day against Bama. He completed 30 of 47 passes for 405 yards, four touchdowns, and one interception. He was a headache all night.

The Tide defense is not the same as last season. From all the teams Nick Saban has coached this might be the best combination of a stellar defensive front and playmakers in the secondary. Alabama allowed 11.8 points per game during the undefeated season this year. That’s the best mark in the entire College Football world.

“Last year is last year,” Watson said. “You can’t look at stuff last year. They have maybe, I want to say seven new starters, eight new starters on their defense. Everyone else is in the NFL. So totally different defense. And you’ve got to go based off through this year.”

Just moving the ball against Alabama is a huge issue. Scoring on them it’s nearly impossible. We saw Washington scoring on the first drive of their semifinal matchup last week. Then, Bama closed down, and the Huskies had no chance.

The pay per head sites understand Alabama’s defense can swing the College Football spread in one play. They have the ability to stop a touchdown from happening to score points on the same play. Their 28.9 points differential was the best of the teams that reached the NCAAF semifinal.

How to bet the Game Total in the Clemson Tigers vs Alabama Crimson Tide College Football Semifinal Matchup:

If we get half of the points we got in last season’s matchup, we are for a great game. The 40- 45 win by Alabama last season was unrealistic. That’s not the essence of any of the two teams.  Even so, the per head sportsbooks set the game total to 50.5 points.

Alabama scores 39.4 points per game and allows 11.8. Only six of the 14 games played this season ended OVER the game total. It’s not a surprise considering they don’t allow anybody to score more than a touchdown. Sometimes not even one.

Clemson averages 39.5 points per game while giving up 18.4 points per game. They split the OVER and UNDER hitting seven each. The Over is 4-1 in the Tigers last five games following an ATS win, 5-1 in their last six vs. a team with a winning record and 4-0 in their last four games after allowing less than 20 points in their previous game.

Why am I focusing on the OVER? Clemson will fight back. As good as Alabama’s defense is, the Tigers are hungry after finishing so close last season.