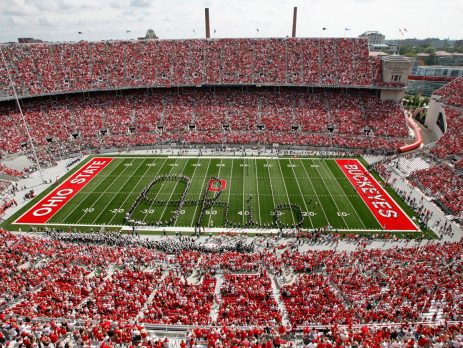 The College Football Betting week 12 picks and point spread comes into a favorite’s edition.  At this point in the season the pph sportsbooks are well aware of which team is good and which isn’t. It’s hard to find a misplaced underdog. That’s why you follow the money with action bets on the favorites.

Don’t be afraid of the College Football betting favorites going on the road. Remember, you want to be on the side of the best team.

These are the picks for week 12 by Best Pay Per Head:

With one loss in their resume, head coach Urban Meyer had no choice but to calm down his players. They were out of the top-4 in the College Playoffs committed. But Meyer knew, in the end, it all would work itself out. The Buckeyes received a significant boost last weekend with the Michigan Wolverines loss in Iowa. More than ever Ohio State controls its destiny.

The Buckeyes opened as 23.5-point favorites in the College Football betting lines for Week 12. The bookmaker software quickly adjusted 1-point and the spread is currently at 22.5. Ohio State smashed Nebraska and Maryland with the same result the las two weeks.

Their 62-3 victory against the Terrapins is not a surprise. But the domination over the Cornhuskers was breathtaking. Nebraska entered the meeting as the 10th team ranked in the Nation.

They allowed just a 30-point game once in the season before meeting Ohio State.Taking down Ohio State is a serious business. They average 46.5 points per game this season, which is second-best in College Football. Their defense is no joke either.

The Ohio State Buckeyes have allowed six points in the last two games combined. Their points against average is the third best in the country, allowing just 12.7 points per game.

Michigan State has been an embarrassment this season. They finally won a game after seven straight losses. Teams like Indiana, BYU, and Northwestern, have taken advantage of the Spartans’ weak defense.

Inside the Big 12, the Oklahoma Sooners have been unstoppable. Yes, they sit at 8-2 with losses to Houston and Ohio State, but the Sooners are 7-0 in the Conference. Their offense is a big deal, and the pay per head bookie knows all about it.

Oklahoma is a field goal favorite on the road. The matchup expects a lot of high-scoring power.

The Sooners average 44.2 points per game; the 9th best number in College Football. Over their last four wins, they have averaged 50.5 points per game. Baylor, Iowa State, Kansas and Texas Tech have been the victims.

The key for Oklahoma to be 8-2 this season is their passing offense. As a team, they average 338.1 passing yards per game, 10th best. Junior QB Baker Mayfield has been outstanding this season.  He has thrown 3212 yards, with 33 touchdowns and seven interceptions. In six of the ten games, he has surpassed their 300-passing yards.

West Virginia Mountaineers Spartans is a more balanced team than Oklahoma. They enter this meeting with an 8-1 record and two straight wins.  They battled to beat Texas at home with a 24-20 result. The Mountaineers do not excel at anything in particular, but their running game shines from time to time. WVU averages 211.4 rushing yards per game.

Between tailbacks Justin Crawford and Rushel Shell, they have recorded over 1000-rushing yards per game and nine touchdowns.  Don’t sleep on QB Skyler Howard who is a double-threat. Howard has added 274 rushing yards and six rushing touchdowns this season.

The USC Trojans wrecked the entire College Football rankings with their win in Washington. The Trojans are far away from becoming a good team, but they will be a pain to whoever faces them.

It seems like USC finally realized who their quarterback should be. Sam Darnold threw for 287 yards, two touchdowns and two interceptions against the fearless Washington defense. Darnold was intercepted twice, yes, but he made the key plays for the win. Since taking over the starting job he has thrown 20 touchdowns passes and just four interceptions.

The game against UCLA is a rivalry matchup, but the Bruins shouldn’t present much of problem. Sitting a 4-6, they recently beat Oregon State after losing the previous four games. With QB Josh Rosen out, the quarterback position hasn’t gotten any better under senior Mike Fafaul. He has thrown two interceptions and just one touchdown in the last two meetings.

This matchup is about momentum. While USC continues to grow, UCLA Bruins has no idea where their football program is headed.