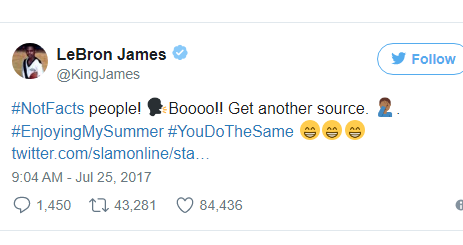 LeBron James and Kyrie Irving might not be best friends right now, but there wasn’t any drama when they were in the same room in Florida this past weekend.

“From very reliable sources. Plural. Kyrie and LeBron were in the same room over the weekend in Florida…Apparently these guys were in the same room and here’s the deal. I don’t know if there’s a thawing out process. All I do know is LeBron didn’t punch Kyrie the way Stephen A thought he would. I can report that. As for what they talked about or discussed…it was very cool. They didn’t get into any heated discussions.”

Despite question marks about their relationship, it is a positive sign for Cleveland that they are at least willing to tolerate each other in person.

Reports about a feud have grown since Irving asked the Cavaliers for a trade in July.

ESPN’s Stephen A. Smith even reported that if LeBron saw Irving, he “would be tempted to beat his ass.”

However, it remains clear the four-time MVP isn’t happy about his situation. NBA insider Chris Sheridan reported Wednesday that James is “100 percent leaving” Cleveland after this season due to a poor relationship with the owners.

He and Irving might be able to tolerate each other for another potential title run in 2017-18, but it seems like their time together is nearing an end.

More news about the lates Sports information at PPPH

There are not great games on Prime Time this week in the NBA, but there are always opportunities to…