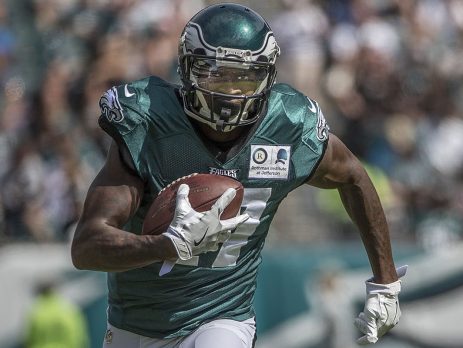 More and more, NFL teams fear season-altering injuries to key players in meaningless games, and also more and more, these games are about deciding who makes the team as the fifth safety or the sixth wide receiver, rather than getting starters in shape to play, as might have been the case in an earlier era.

All that having been said, here are 10 story lines you might want to keep track of:

1. Making a connection: The new No. 1 receiver blazed through an amazing first week or so of training camp, suffered a minor shoulder injury, and has been kept a bit under wraps since. It’s clear Alshon Jeffery isn’t much about the preseason. It’s also clear that Carson Wentz has a slightly different mindset, would really like to get some game reps with his shiny new weapon. Will they be able to do anything, if the offensive starters only play a dozen or so snaps, as Pederson outlined Tuesday? Wentz seemed to think he might be out there a bit longer. He seemed to want to be out there a bit longer.

2. Identity crisis: Will Ronald Darby wander into the wrong huddle or over to the wrong bench? A week ago, Darby was still the Bills’ top corner. Since being traded to the Eagles last Friday, he hasn’t seemed totally comfortable with the idea of playing so quickly — not because the opponent is Buffalo, but because he is still in the early stages of learning Jim Schwartz’s defense. But the coaches seem to think they can give Darby some simple assignments (“press this receiver, then run real fast downfield with him”) and get a look at their brand-new major acquisition for a series or two, at least. In camp practices, he was effective right away, whether he understood the scheme or not.

3. Playing the slots: Nelson Agholor makes his debut in the role vacated by Jordan Matthews, who won’t play after suffering what the Bills termed a chip fracture to his sternum in his first Buffalo practice. Has Agholor put his struggles with confidence behind him? Can he be the kind of safety valve for Wentz that Matthews was? What of the other options – big, fast rookie Mack Hollins, rookie running back Donnel Pumphrey, or tight end Trey Burton, who already has a close bond with Wentz?

4. In the long run: Last week’s pass-run ratio (54 passes, 19 runs) was an unpleasant reminder of Pederson’s Andy Reid pedigree. Pederson’s explanation was that the runs weren’t getting anywhere, which also sounded Andy-like (so, do ya ever stop passing because THAT isn’t working very well? No?). Anyhow, Pederson, the running backs and the offensive line were embarrassed, and you can look for a much more sustained effort at ironing out the running kinks against the Bills. “The plan would be to try to get that established a little bit this week and see where it goes,” Pederson said. Nobody needs to watch Matt McGloin sidearming 42 passes again this week. One player to watch here: rookie runner Corey Clement, from Glassboro, N.J., by way of Wisconsin.

5. Hold on, hold on: Neko Case probably wasn’t watching last week, when the Eagles and Packers combined for 10 fumbles, and she’s lucky, it wasn’t pretty. Lots of talk about ball security this week. “I felt like we were a little sloppy and loose in the second half, with some of the turnovers,” Pederson said of the preseason opener.

6. Point of no return: After watching the adventures of Donnel Pumphrey and Greg Ward trying to return punts at Green Bay, management went out and signed Rashard Davis, a 5-9, 175-pound undrafted rookie from James Madison who had spring tryouts as a returner with the Bears and Jets. So presumably we’ll see Davis, wearing No. 4, doing that against the Bills. The “real” punt returner is still Darren Sproles, but at 34, he isn’t going to be risking injury in the preseason, and the team obviously needs a capable backup.

7. Line dance: Jason Peters is away on a personal matter and isn’t expected to play, meaning Lane Johnson moves to left tackle and journeyman Matt Tobin takes over at right tackle. Though Brandon Brooks seems pretty much over his ankle strain, the prudent thing would be to sit him again and give Chance Warmack another start at right guard.

8. Not so special: Dave Fipp’s proud unit was caught flat-footed on a 68-yard punt return for a touchdown last week, not at all a welcome sight, especially when you add it in with the previously described adventures in punt returning. Expect a little tighter, tougher showing this week.

9. Shady business: LeSean McCoy indicated he was less than pleased with the trades that took away wide receiver Sammy Watkins and corner Ronald Darby, bringing corner E.J. Gaines and wide receiver Jordan Matthews, but mostly bringing second- and third-round draft picks to an organization that seems to be in teardown mode. Shady is 29 now, and those draft picks probably aren’t going to do him much good. How will the Eagles’ all-time leading rusher look Thursday night, and what will he have to say about his situation? Buffalo News columnist Jerry Sullivan wondered this week whether McCoy will be “all-in” this season.

10. Crowded receiving line: Given where the Eagles were at wide receiver a year ago, it seems odd to be saying this, but one of the biggest roster battles the rest of the month will be for the final few wide receiver spots, even after the trade of Jordan Matthews. Holdover Bryce Treggs seemed a bit of an afterthought until he caught seven passes for 91 yards at Green Bay. Marcus Johnson has had an excellent camp, missed the preseason opener with a hamstring problem, but should play Thursday. Shelton Gibson is a raw, speedy guy whose fifth-round pedigree might mean the team is reluctant to try to sneak him through waivers onto the practice squad. Converted QB Greg Ward seems explosive. Last year’s hero of the people, Paul Turner, is just a guy in the pack now. Will the Eagles keep five WRs or six? I’m thinking six. Barring injury, the top four are Alshon Jeffery, Torrey Smith, Nelson Agholor and fourth-round rookie Mack Hollins.

More news about the lates Sports information at PPPH