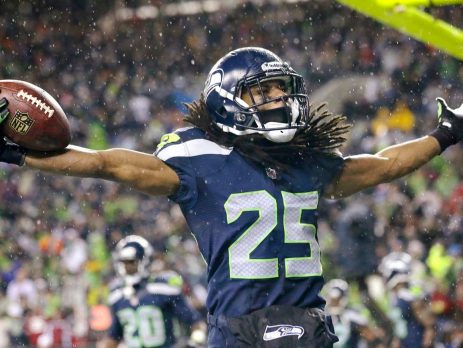 He’s now in the third year of that contract, and the Seahawks are trying to shop him out of Seattle. Several reports say the team is asking for an NFL draft first round pick along with a mid-draft pick in exchange for Richard Sherman. Teams have started to call for the right price to land the cornerback and his pricy deal. And these are the ones with the better chance to get a deal:

The New Orleans seems desperate for a defensive improvement. They have let QB Drew Brees down over the last few years, not giving him a good defense to compete. Brees will be 38-years old this season; if they want to give him another shot at the title, then they need to address the defense.

The Saints were trying to make a deal with the New England Patriots for CB Malcolm Butler, but things haven’t fallen through. But because of that aggressive approach, the price per head bookie expects New Orleans to make a move for Sherman in the next few weeks.

The Raiders are trending up. They have a put together a magnificent offense, and they are ready to challenge the Patriots for the AFC dominance. An asset like Richard Sherman can help a secondary defense that struggled in 2016.

Oakland had the 24th passing defense last season. If they get a shutdown cornerback like Sherman, things will immediately chance for the Raiders.

At this point, the Atlanta Falcons are only looking for options to improve an already very good roster. The sports bookie software has the Falcons as favorites to win the NFC South and one of the favorites to represent the NFC in Super Bowl LII.

If Atlanta lands Sherman, he will bring experience to a young group that’s coming off the worst loss in franchise history. If the Falcons offense can perform at the same level they showed in 2016, then Sherman and the defense will play with the lead most of the time. We understand how good Richard is when he knows opposing quarterbacks are in obvious passing situations.

Richard Sherman to the Dallas Cowboys makes perfect sense for the per head sportsbook. JJ Wilcox, Barry Church, and Morris Claiborne left the team during the free agency period. Those three players were the heart and soul of the Cowboys secondary. Of course, each underperformed to an extent, but to replace those veterans all at the same time is an issue for any squad.

A possible Sherman arrival could be the first piece to a major defensive puzzle the Cowboys need to figure out before the season arrives.

The Titans had the 30th passing defense in the NFL in 2016. They had all sort of issues against good passing offenses. Here’s the difference with Oakland: Tennessee does have a good front seven who can rush the passer. If they add a playmaker in the secondary defense, things will make a significant swing for a better defensive unit. Adding Richard Sherman will make the Titans favorites to win the AFC South, according to the best pay per head bookie service.

Why are the Seahawks odds so high to retain Richard Sherman? The answer is simple. Seattle is ready to move on from him. Sherman is a great player, but perhaps head coach Pete Carroll is trying to get rid of him one year earlier instead of one year too late. He’s trying to pull a Bill Belichick.

It’s not an easy move because Sherman is a fan favorite in Seattle. He’s the facing of the Legion of Boom and one of the leaders of the team. But he’s so outspoken; he has become an issue for the team in recent years.  Whenever you are winning, the talking doesn’t hurt anybody. But the minute the losing starts; the talking becomes annoying and disrespectful.

The Jaguars have been very active over the last two season in the free agency. Technically Richard Sherman is not a Free Agent, but that won’t stop the Jaguars to consider the possibility to add him.

This season they added DE Calais Campbell to improve the pass rush. They had the 5th best passing defense in the NFL last season. An addition like Sherman would make this unit one of the best in the league right away.

The Packers are not known for making flashy moves in the offseason, and that’s why the online bookie software have them high on the odds chart to add the still Seahawks cornerback. The thing is, Green Bay could use the help.

They were destroyed by the Atlanta Falcons last season in the NFC Championship game. With QB Aaron Rodgers under center, they will always have a chance, but they need to make the necessary adjustments on defense to compete all the way to the Super Bowl.

In a very unlike Patriots way, New England has been incredibly active in the offseason. The trade talks rumor between Seattle and Richard Sherman started with one team as the primary destination: The Patriots.

There is mutual respect between Sherman and the Patriots coaching staff. They met in Super Bowl 49 in arguably the best Super Bowl ever played. If New England can’t get an agreement with restricted free agent Malcolm Butler, I wouldn’t be surprised if they make a move for Richard. After all, the Pats are loaded on both sides of the ball, and they are looking to repeat.

The field means any other team that is not in the ones mentioned above. The pph sportsbook could consider other teams like the NY Jets, the Chicago Bears, and the Houston Texans; all with secondary needs. There is also the chance of landing him to San Francisco, who has a lot of money in the bank. Remember, Richard Sherman is not chasing the ring. He already played in two Super Bowls and won one.