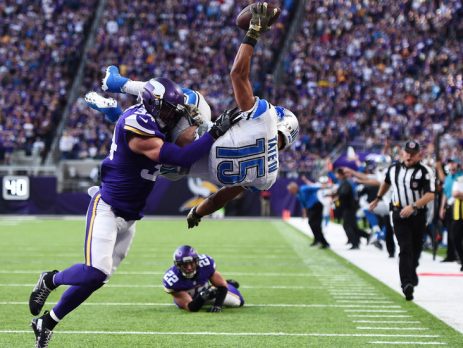 “He is as classy, hard working and stand up as anyone that passed through our league ever,” Orlovsky wrote. “He was a part of some historically tough times. That would weigh and wear on anyone. Even Megatron.”

The Lions made Johnson the highest-paid receiver in NFL history, but Orlovsky said it’s understandable if the money wasn’t enough for Johnson to tolerate losing, and that if Johnson didn’t feel respected by the Lions, he’s entitled to feel that way.

“Sports are fun when you win. Period. When your greatness is covered by your teams’ lack of it effects you immensely,” Orlovsky wrote. “He was once on a lifetime player. He should’ve been treated that way outside of $. If he feels he wasn’t, he’s probably right. . . . He should’ve been revered from top down.”

Johnson always had the respect of his teammates throughout his NFL career, so it’s unsurprising to see teammates coming to his defense now. We so far haven’t heard, however, whether players who are still on the Lions agree with Johnson’s belief that losing wore on them — or whether they think he should have stuck with them last year, when they made the playoffs and could have used a superstar receiver to help them win in the postseason.

Get great insight from your online bookie software here