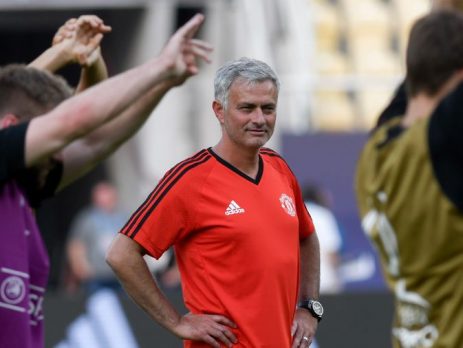 The Portuguese will be keen to quickly follow-up their Europa League triumph on the one hand but an energy-sapping clash against arguably the best team in the world five days before their Premier League opener against West Ham is probably less than ideal.

The weather conditions certainly cannot be underplayed with the southern part of Europe experiencing a spell of extreme heat and temperatures at kick-off could still be in mid-90s.

That will trigger extended drinks breaks while 20kg of crushed ice will be available to both benches – this would be a punishing assignment for a team at the peak of their powers in the heart of the campaign rather than still trying to find their fitness in pre-season.

In a strange twist, the pair have already met towards the end of last month on another very hot day at Levi’s Stadium in Santa Clara, California as part of their friendly schedule where it is fair to assume neither gave very much away ahead of the main event.

Wholesale changes were the order of the day on a draining afternoon on that occasion and if the weary penalty shootout won 2-1 by United is anything to go by, expect to see some highly-paid athletes out on their feet in the Macedonian capital by the final whistle.

Mourinho is going to have to manage his personnel very carefully as they attempt to upset the odds and Champions League winners while at the same time not leaving their Old Trafford opener in the scorching Balkans.

He will also hope a depleted defence currently missing Eric Bailly, Phil Jones and Luke Shaw can emerge without any more issues to deal with as well.

Chris Smalling and summer arrival Victor Lindelof are on the brink of being the last duo standing in that department so expect an important role from another new boy Nemanja Matic at the base of midfield to help protect the back line.

Balanced against all that, the Super Cup is the one major trophy to elude Mourinho and despite playing a very straight bat when it came to discussing Madrid, it would be crazy to think he would not derive a good deal of satisfaction getting one over a previous employer.

Real report that Cristiano Ronaldo has been included in the squad as he potentially returns to the fray following an extended break after his involvement in the Confederations Cup.

Now 32, his game has adapted beautifully over the last couple of years to help extend a stellar career but I doubt head coach Zinedine Zidane will be in too much of a hurry to give him a serious workout in the conditions.

There is certainly a bit of educated guesswork when it comes down to selecting a bet but it is tough to imagine both sides tearing into one another.

Cancelling each other out in pedestrian fashion for 90 minutes is not much of an option either with the unwanted prospect of extra-time looming on the horizon.

I totally get the money coming in the build-up for under 2.5 total goals but I might just try and nick some profit with a small investment on victory going either way by a 1-0 margin in a bid to reach a successful conclusion for one participant before the need to go beyond regulation play.