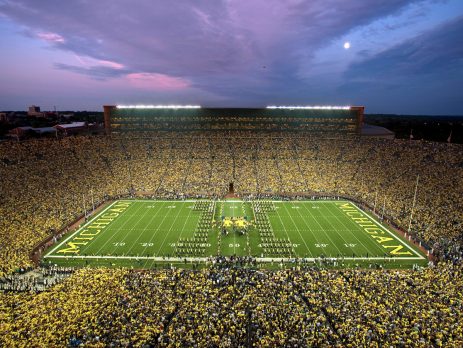 Let’s start the College Football Week 9 Betting Predictions with the best three games of the weekend.  They all have significant implications in the playoffs landscape and could potentially hurt a team on the wrong side of the result when Saturday is over.

The online bookies are excited for this week. The matchups between Conference rivals have special meaning left and right.  These are the NCAAF Week 9 picks:

The Wolverines against the Spartans should have been one of the best games of the season; instead, we get one title contender as a 23.5 point favorite over their conference rival.

Michigan will go into East Lansing as an undefeated program ready to prove why they are listed as the second best team in the nation. A potential loss against Michigan State wouldn’t hurt their playoffs chances; it would only raise some questions.

Why wouldn’t it hurt their postseason chances? It will all come down to the Ohio State matchup in the last game of the regular season.

The Wolverines opened the College Football week 9 spread as 21-point favorites. Two days later the line quickly moved to 23.5. Michigan is 7-0 straight up but 4-3 against the spread this season. In fact, they failed to cover the spread as a 40-point favorite against Illinois last week.

Even so, coach Jim Harbaugh has put together quite a program in only two seasons. The mark of this team is their relentless defense.  Michigan hasn’t allowed more than a touchdown in the last three outings.

Their D is the best in College Football in total defense and points scored. Yes, they haven’t faced a ranked team yet. And yes, their schedule looks incredibly easy. But they are allowing just 10.0 points per game against in 2016. That’s the best number in the nation.

Michigan State hasn’t won since beating Notre Dame in week two. Back then, we all thought it was a great win. Now they have dropped five straight and looked like a shelf of the team that went to the playoffs last season.  The Spartans will go to this meeting with a 2-5 SU record and 1-6 ATS.

Yet, they are the play this weekend. Don’t get wrong; the Wolverines are the best team. But betting on them of the road as 23.5 point favorites looks like a risky play.

Before making any action bets, remember this is a rivalry game. A win would mean the world for Michigan State, even if they continue down the horrible path they have this season.

The College Football betting trends back up the move as well. Michigan State is 7-1 SU in its last eight games when playing Michigan. But also the Spartans are 4-1 ATS in their last five games when playing at home against the Wolverines.

Washington Huskies doesn’t have the same luxury as a team like Michigan does.  The Huskies are trying to earn respect, but they don’t have it right now. They might need to win out to get to the College Football playoffs. That’s why this game in Utah is tricky.

The price per head sportsbooks software made Washington a 10-point favorite on the road for this week. Currently, they are 7-0 straight and 4-3 against the spread. The Huskies have scored 48.3 points per game until this point, which is the fourth-best mark in the nation.

They have allowed only 14.6 points, which is sixth best. Those are great numbers, but they have only faced a ranked team this season. Another problem is the Huskies are 19-44-2 ATS in their last 65 games in October.

Utah is a physical team that usually imposes their will.  Washington is also physical but also very fast. It sounds cliché but whoever wins the battle at the line of scrimmage will win this one.

The Utes sit at 7-1 SU and 4-4 ATS without any fear of Washington.  They know a win over the Huskies will put in the driver seat of a potential playoffs berth if a Pac-12 team gets in.

Their 52-45 win over UCLA last week showed they could go head to head with any team in the Conference.  They can either match a low scoring affair or beat teams with quick strikes on offense.

We can all agree both Clemson and Florida State have been disappointing at some sort this season. The Tigers are still unbeaten, but they have struggled to stay that way. The Seminoles were labeled as one of the most talented teams in the nation.  They have lost twice already this season.

The sports betting agents set this game as the one who decides the faith in the ACC. Although both teams are not where they want to be, the game could still have the same implications.

Clemson Tigers is 7-0 straight up and 4-2 ATS.  They average 36.6 points per game. It’s a good number but is not impressive considering they have Deshaun Watson as their quarterback.  Watson was nearly unstoppable last season.

In 2016, teams have been able to contain him.  He doesn’t scramble out that much and has already thrown eight interceptions. Watson was the Heisman Trophy favorite entering the season.  Those College Football odds have diluted with his latest playing form.

The problem for them is they need to match a Clemson team that has played good enough in big games. The Tigers win these types of games.

Florida State hasn’t shown us that yet. The bookie business is about knowing who the best team on the field is, and is not the Seminoles.