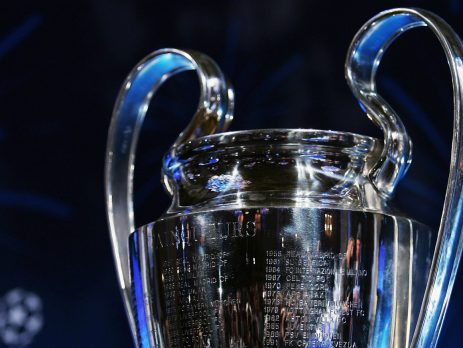 Somehow Group G and H crossed to have Champions League matchups in the Round of 16. Like it wasn’t enough, both games are on the same day. This Wednesday we will find out which group was the stronger.

The sports bookies are prepared to see the underdogs rise to a level where these games are competitive. Sevilla and Leicester City will clash in a strange series. While Leicester is the EPL Champs, they are getting no respect by the bookie business.

Juventus and FC Porto will meet at the same time in a matchup of two former European Champions. The Italians are the favorites but home field advantage could even things out.

Here are the Champions League Predictions For Wednesday

When you think about the Premier League’s champions, you can’t help to think about a great club with lots of talent on their roster. This time, it’s nothing like that when mentioning Leicester City. The EPL Champs are the underdogs in the Round of 16 series against Sevilla, and their dreamed bubble is about to burst.

Leicester City has been awful this season in the Premier League. They are in the 17th place in the standings and just one year removed from their unpreceded title run; they are battling to stay in the top flight.

Somehow and with the awful campaign they have put together this season, Leicester won group G in the UEFA Champions League.

They ended in first place with 13 points after four wins, one draw and one defeat against opponents like FC Porto, FC Copenhagen, and Club Brugge. Those numbers give them the chance to close their round of 16 matchup against Sevilla at home. But even so, the pay per head services can’t see then advancing.

The online bookie software listed Leicester City 5/2 to advance to the quarterfinals. Sevilla, on the other hand, is 2/7 despite finishing second in their group.

The problem with Leicester City is the momentum. There is none. They have lost six of their last eight games in all competitions, including their last two in a row. During the weekend they were embarrassed by losing 1-0 to Millwall in an FA Cup fixture.

The last time they won in the Premier League was back in December. They are a small club that reached for the stars and got some, but quickly is finding out where their real place is.

Sevilla is a more successful club, who hasn’t had any luck during their Champions League runs. They finally have a favorable matchup to get in the last eight of the competition. They finished the group stage with 11 points after three wins, two draws, and one loss. They earned 11 points; three fewer than Juventus, who ended up in first place in group H.

The Spanish club enters to this game with four wins in their last six games in all competitions, including wins over Las Palmas (1-0) and Eibar (2-0) in their last two games at La Liga.

Sevilla has a solid roster who understands how to play these elimination series. They are far superior to Leicester City and shouldn’t have problems beating the per head sportsbook advancing to the quarterfinals.

For this first meeting, we need to consider the home team. Sevilla is -1.5 favorites in the handicap playing the first leg at home. It has to be insulting for Leicester City to see no one believes in them.

Usually, teams find a way to put aside their bad domestic league run and play the Champions League with intensity. I think Leicester City can have this mindset for Wednesday.

If we grab the Foxes at +1.5, it guarantees to cash some money with three results: a draw, a Leicester City win, or even a Sevilla victory by a one-goal difference.  The problem is they have been so bad overall this season; I can’t put my money on them.

Last week, Borussia Dortmund showed us you need to kill a Portuguese team when you can. Otherwise, they will fight back and a steal a win under the ashes. Dortmund let Benfica comeback in their Round of 16 matchup because they didn’t score when they had the opportunities to do so. Juventus can’t afford to make the same mistakes.

Juve is superior to FC Porto in every line. The Italians have been listed by the price per head sportsbooks 1/4 to qualify for the quarterfinals. Meanwhile, the Portuguese are a long shot at 11/4.

Juventus won group H with 14 points after four wins and two draws. They are one of the six teams who didn’t lose a game during the group stage. They also scored 11 goals and allowed the fewer of any team with just two.

The Vecchia Signora is a title contender if they find favorable matchups along the way. Their series against Porto sure is one of them.

Juve is a comfortable Serie A leader. They have won seven straight games in all competitions. This past weekend they smacked Palermo with a 4-1 result. Their only goal for the rest of the season is to keep the same pace in the domestic league and improve when playing the Champions League. Juventus hasn’t won the European title since 1996; it’s the central goal for this generation to get back to the top in Europe.

FC Porto finished second in group G behind Leicester City. They won three games, drew two and lost one. They had a 9-3 goal scored/allowed ratio, which is not bad at all. But they were unlucky with the draw.

To be a bookie, you need to realize first if there is room for an upset in these games. There is a slim chance of this happening in this series, particularly since Porto plays the first leg at home. The problem is FC Juventus is a complete team who won’t be manhandled by any inferior opponent.

Porto’s recent momentum suggests they get to this game in a great form. They have won six games in a row, including victories in the Primeira Liga over Tondela and Guimaraes where they kept their clean sheets.

Porto is listed +0.5 at home against Juventus by the pph sportsbooks, but even with the leverage, I’m don’t feel comfortable backing up the Portuguese. Juventus is far more talented and with more experience. They should win both games and advance. Juve is a team who is not used to drawing or losing in any competition.