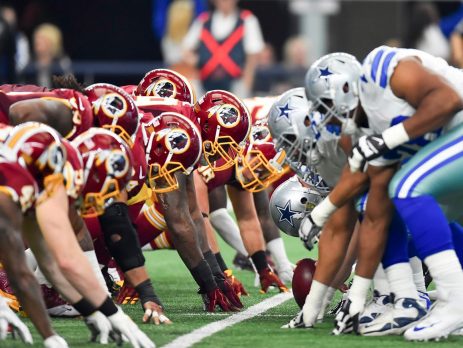 The best team in the NFL, the Dallas Cowboys, will have a lot to prove on Thanksgiving Day. Their usual matchup to the Washington Redskins will become the stellar game of the Thursday lineup.

The pph sportsbook made the Cowboys 6.5-oint favorites.  Dallas beat the Baltimore Ravens 17-27 last week. It was their ninth win in a row. This will be the second time the Cowboys play the Redskins after winning the first meeting 27-23 in week two.

Washington smacked the Green Bay Packers 42-24 on Sunday Night Football. The Redskins have improved on both sides of the ball. However, they know this game will tell them exactly how they ranked in the NFL.

Inside the NFC East division, the Cowboys are the most scoring team in the NFL. The Redskins have the defense that allows the most points inside the division. However, this game is slightly more complex. This is what we are here to study.

These are the Washington Redskins at Dallas Cowboys Thanksgiving Odds and Picks:

Washington doesn’t care about the winning streak the Dallas Cowboys are having. They feel good about themselves after beating the Green Bay Packers 42-24 on Sunday Night Football. Of course, we cashed in with the Redskins covering the NFL betting odds. The OVER was money as well.  However, the most impressive thing wasn’t our pick; it was how comfortable QB Kirk Cousins looked under center.

Cousins is playing under the franchise tag. He needs to prove to himself and his bosses he’s the right guy to lead this team in the upcoming years. Cousins completed 21 of 30 passes for 375 yards and three touchdowns against Green Bay. I get the Packers are lousy on defense. I get it. But no one can deny Cousins looked fantastic throwing the deep ball.

The bookmaker software made Dallas close to a touchdown favorite for this meeting. Washington doesn’t like that. They have won six of the last eight games. Their wins have been just as impressive as what the Cowboys have shown. In fact, in those eight games, they have a 6-1-1 record, considering they tied to the Cincinnati Bengals in London.

It’s going to be a great game. The Redskins have found a balanced offense that can do damages all over the place. Washington averages 301.4 passing yards per game, which is 3rd best in the NFL. They also average 117.4 rushing yards per game. RB Robert Kelley is coming off his best game of the season with 137 yards on 24 carries. He punched the ball into the end zone three times.

One of the pieces of advice on how to be a sports bookie is to evaluate the trend of the public betting. The Dallas Cowboys are the hottest team in the NFL right now. Not only are they 9-1 with nine straight wins, but they have covered the spread in all those nine wins.

Their last win over the Baltimore Ravens took everything they got. They beat Baltimore 27-17 as they faced the best total defense in the league. RB Ezekiel Elliot, who is an MVP candidate, ran for 97 yards. He didn’t score a touchdown, and those yards needed his biggest effort.

What Dallas needs to be happy about is they can win by several ways. Elliot didn’t have his best game, and it didn’t matter. It was QB Dak Prescott who took over.

The rookie QB completed 27 of 36 passes for 301 yards and three touchdowns. Prescott didn’t fear the best defense in football. He made them pay.

The online bookies know the Cowboys are rolling. But on a short week and against a division opponent they couldn’t make them favorites by more than a touchdown.

Dallas is 4-0-1 ATS in its last five games at home, 15-5 SU in its last 20 games when playing at home against Washington and 9-0 ATS in their last nine games this season.

Remember Dallas has the second best rushing offense in the NFL, averaging 156.7 rushing yards per game. The Cowboys offense scores 28.5 points per game, third-best in the league.

How to bet the Game Total in the Washington Redskins at Dallas Cowboys NFL Week 12 Matchup:

Most people don’t realize how good the Dallas Cowboys have been this season, especially on the offensive side. The price per head sportsbooks are planning against this team. The Dallas Cowboys gained 417 total net yards in the team’s 27-17 win over Baltimore.

That marked the team’s eighth consecutive game with at least 400 yards, tied for the longest single-season streak in NFL history (2007 New England and 2013 Denver).

You might think that number is good stats for the fans. Not so fast. The 2007 Patriots and the 2013 Broncos are the two most prolific offenses in the history of the NFL. That’s the company the Cowboys are joining right now.

Keep in mind Dallas has scored 30.6 points per game in their last six wins. They can put it together in two different ways. Either Elliot will go off with his running power or Prescott will move the ball around under center.

A good thing is Washington Redskins won’t back out of a fight. Especially from a divisional fight. The Redskins average 25.9 points per game, 9th best in the NFL.

The 42 points they scored on Green Bay last weekend showed they could put together long drives in different ways.

Two great offenses against two average defenses. It’s about the OVER in Thanksgiving. It should be firepower after firepower on this one.

Washington Redskins at Dallas Cowboys Thanksgiving Odds and Picks: Redskins +6.5 and the OVER.