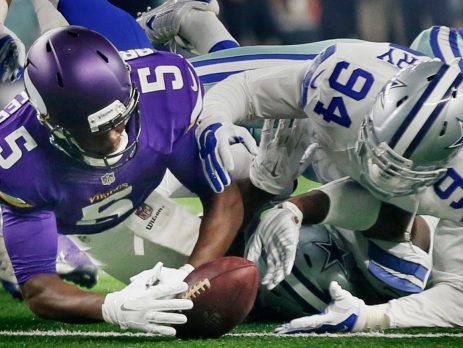 It’s a great scenario for a Thursday Night Football game between two teams well rested and ready to go. Both the Minnesota Vikings and the Dallas Cowboys played on Thanksgiving. Both had exactly a week to prepare; something uncommon for TNF matchups.

The Cowboys are 10-1 and 9-1-1 against the spread after beating Washington last week. The Vikings are 6-5 straight and 6-5 ATS after losing their second of the season against the Detroit Lions.

It’s a must-win situation for Minnesota. A loss would put in a bad spot searching for a playoffs seed. For Dallas, it’s another opportunity to show the world they are for real. Many sports bookies haven’t bought in. The 11th win in a row should be good enough to turn the skeptics.

These are the TNF Dallas Cowboys at Minnesota Vikings Betting Odds and Picks:

The Dallas Cowboys are the best team in the NFL. It’s simple, and it’s undeniable. The NFL betting experts also know no team wins the Super Bowl in November. Which means it’s fair to say it’s time to pump the breaks.

Dallas has won ten games in a row. They have covered the spread in nine of those games. They failed in the 31-26 win over the Washington Redskins on Thanksgiving. They were 5.5-point favorites, according to the PPH sportsbooks.

A team like the Cowboys travels well. They have the winning formula of a squad that can dominate anywhere and anytime. On offense is about running the football early and often. Dallas averages 157.3 rushing yards per game, the second best number in the NFL. They have the best tailback in the game, and he’s just a rookie. Ezekiel Elliot continued his dominance against Washington on Thanksgiving. He had 97 rushing yards and two touchdowns against the Skins. He added two catches for 23 yards.

The entire Dallas offense is based on his performance. Elliot hasn’t had a bad game since he entered the league. He’s about to face a Vikings defense that has had great games and some lousy ones as well. Minnesota allows 100.2 rushing yards per game. Expect that number to go higher after they face Elliot and the tremendous Cowboys offensive line.

There is another issue with the Vikings, but it comes on offense. Unlike Dallas, Minnesota can’t run the football.  They are death last in rushing yards per game, averaging 71.1 every weekend.

The pay per head sites tends to take stats like this one very seriously. While the Cowboys can sustain long drives, the Vikings will be forced to play a one-dimensional offense. It’s not a recipe for success if you are the home team.

The hype about the Dallas Cowboys is real. They deserve it too, but it can be a little dangerous for teams without experience. The Cowboys haven’t had a team like this in years. In fact, their 10-game winning streak is the best in franchise history.

Minnesota can take advantage of that hype if they find ways to put Dallas in bad positions. The Vikings have a dominant defense, and it’s time to use it. Their defense is the 3rd best total in the NFL.

They only allow 17.5 points per game, which is the second best number in the league.

Expect them to put plenty of bodies in the middle of the field to stop Ezekiel Elliot. But also expect their secondary to be aggressive against rookie QB Dak Prescott. Minnesota has recorded 28 sacks this season.

Their front seven allows the secondary to play an aggressive role against any quarterback.  The Vikings have earned 12 interceptions this season, the third-best mark in the National Football League. I get that Prescott doesn’t force the ball. But one little mistake and Minnesota has just the right team to take advantage of it.

The bookmaker software made Minnesota just a field goal underdogs. It’s a surprising number for a team that has lost five of their last six games. Especially facing a squad that has won their last ten in a row. What is the reason? The Vikings defense is legit.