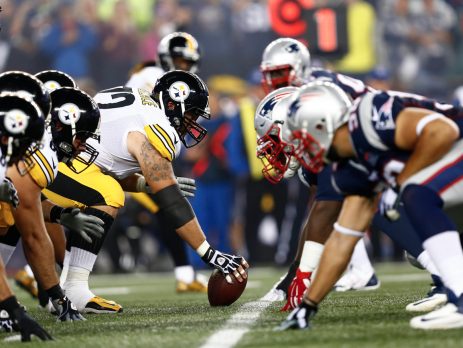 The Pittsburgh Steelers and the New England Patriots will close Championship Sunday at Gillette Stadium. Between quarterbacks, Tom Brady and Ben Roethlisberger are nine Super Bowls played and six rings. Neither will be nervous. Both have been to some battles.

The Pats got here after beating the Houston Texans 34-16 last week. It was an awful game by their offense, and yet they won by 18 points. That should count for something.

Pittsburgh is 0-2 against New England in the playoffs since Tom Brady joined the league. Both losses were at home. Not playing with the pressure of the fans might help their cause.

This is the Road to Super Bowl LI – Pittsburgh Steelers at New England Patriots Odds and Predictions:

The Pittsburgh Steelers are the one team the Patriots didn’t want to face.  The Steelers can match the Pats point by point on the offensive side. They have also improved a lot of their defensive efforts.

The bookmaker software made the Patriots a 6-point favorite, but it looks a little high for my taste.  Pittsburgh enters this meeting with nine wins in a row, including victories over the Miami Dolphins and the Kansas City Chiefs in the playoffs.

Pittsburgh has two key players the Patriots won’t be able to stop. The strength of New England is to minimize the impact of the opponent’s best player. In this case, the Pats would have to pick their poise.

Either they focus on WR Antonio Brown who had 1284 yards and 12 touchdowns this season; or they go to Le’Veon Bell, who posted 170 rushing yards against Kansas City last week. Either way, the defense will have the odds against them. Both are multi-talented players with hunger for success.

The Patriots are 1-6 ATS in their last 7 Conference Championships games. The only time they covered was against Andrew Luck and the Indianapolis Colts in 2014. It was the infamous win on “Deflategate” night.

The New England Patriots are the gold standard of the NFL. Whether you like them or not. The Patriots have reached 11 AFC Championship games under QB Tom Brady and six in a row including this one. Both are NFL records.

The Patriots have been money this season. They are 15-2 straight up and 14-3 against the spread including the playoffs.  Even last week, where they didn’t play their best game of the season, New England won and covered a huge spread.

The Pats are so well-coached, even when they are bad, they are a good.  Against the Steelers, they won’t find the same problems they had against Houston. Despite Pittsburgh is a better team than the Texans, Houston defense was phenomenal pressuring Tom Brady last week. The sports betting agents would have taken a beating if the Texans had a capable quarterback under center.

The Steelers can pressure the quarterback but not this way. Brady will have more time to make plays.  And Pittsburgh knows exactly what that means. Tom Brady is 7-2 against the Steelers on his regular season career with 24 touchdowns and three interceptions. He’s also 2-0 against Pittsburgh in the playoffs; both times they met in the AFC Championship game.

New England has not trailed in a game since Week 12. They have gone 361 minutes, 56 seconds of game time without trailing; that’s more than six games.

How to bet the Game Total in the Pittsburgh Steelers at New England Patriots NFL divisional playoffs Matchup:

Both the Patriots and the Steelers can engage in a defensive battle, but it’s hard to think this game will be UNDER the game total with these two quarterbacks. The pay per head bookies set the total to 50.5 points. The total has gone OVER in 8 of Pittsburgh’s last 12 games when playing New England and in 4 of the Patriots’ last six games when playing at home against the Steelers.

Pittsburgh Steelers at New England Patriots Odds and Predictions: While betting on the game total is a little tricky, the spread has a little more clarity. There isn’t a touchdown of difference between these two teams; especially with a ticket to the Super Bowl on the line. Grab the Steelers +6.