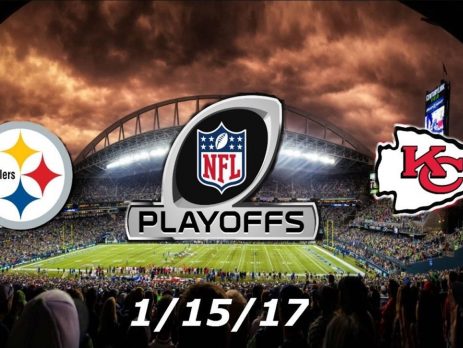 The Kansas City Chiefs and the Pittsburgh Steelers will meet in one of the most interesting games of the weekend. Kansas City hasn’t won a home playoffs game since 1994, but they are on a great run entering this meeting.
The Chiefs rested last week after earning the second spot in the AFC. The online bookies made the 1.5-point favorites in the NFL betting spread.

The Steelers haven’t reached the AFC title game since 2010. They beat the Miami Dolphins 30-12 last week and showed they are ready for a Super Bowl run.

These are the Pittsburgh Steelers at Kansas City Chiefs NFL Odds & Picks:

When the Steelers are rolling, you don’t want to mess with them. Last week, the Dolphins gave it a shot and were hammered by Pittsburgh. Unlike most teams, the Steelers can end the game in a couple of plays. Against Miami, they found WR Antonio Brown twice in the first quarter and never looked back.

In week four the pph sportsbooks and the Kansas City Chiefs were a testament of what I mentioned above. Pittsburgh destroyed the Chiefs 43-14 on Sunday Night football and never gave us an opportunity to watch what looked like an exciting match.

Of course, this happened in September, but the reality is the Steelers have the mental upper hand after that victory. When these two teams jump on the field on Sunday, Pittsburgh will remember they destroyed the Chiefs. They will just try to do it again.

Kansas City is known for their defensive efforts. They are a bend but don’t break type of defense. The problem is they give up a lot of yards through the air. The Chiefs give up 247.0 passing yards per game.  Against the Steelers, it would be suicidal to allow this pace. WR Antonio Brown is arguably the best wideout in the game. The Chiefs don’t have anybody that can match with him.

The problem about facing Pittsburgh is Brown is not the only headache. The pay per head sites know teams will have to make a huge effort trying to stop RB Le’Veon Bell on every down. Bell is an unusual tailback. He doesn’t hit the holes as quick as the rest of the running backs in the NFL. Instead, he waits for his O-line to do the work and then hit the spot.

The Chiefs are not the sexy team in this matchup. If they keep advancing, they won’t be the hot team in any of the matchups. Their formula to win games is simple and somehow boring. Control the clock, don’t make mistakes and rely on their defensive studs.

Kansas City doesn’t care if you or anybody else disrespects them. They have won 23 games since 2015, the second-most in the NFL during that span. The sports betting agents were eager to make the Steelers the favorites in this game, but stats like that one showed it was a bad business.

The Chiefs have won 10 of the last 12 games. They are a different team that the one was crushed in Pittsburgh in week four. First, they have LB Justin Houston back. Houston dealt with an injury for the first three months of the season. He has been a difference maker since his return.

Second, WR Tyreek Hill didn’t exist then. Hill is now the most explosive player in the Chiefs uniform and arguably in the NFL. He should be the difference maker in the offense and special teams.

How to bet the Game Total in the Pittsburgh Steelers at Kansas City Chiefs at NFL divisional playoffs Matchup:

Betting on the NFL game total for this game is tricky. The pay per head bookies set this one at 44 points. The OVER will hit if the Steelers establish their game and the Chiefs are forced to match them point by point. The UNDER will hit if Kansas City can milk the clock and execute their game plan.

Only six of the 17 games played this season ended OVER the game total for the Steelers. Usually, the bookmaker software sets huge numbers knowing Pittsburgh has the tools to score in a blink of an eye. It’s not that the Steelers are not scoring points; it is the bookmakers are putting unreachable numbers.

Pittsburgh Steelers at Kansas City Chiefs NFL Odds & Picks: it might be an unpopular opinion, but I see the Chiefs as the most complete team of the two. QB Ben Roethlisberger suffered an ankle injury against the Dolphins. The Steelers have tried to downgrade the issue, but this is an issue. Believe me. Grab the home team. Chiefs -1.5