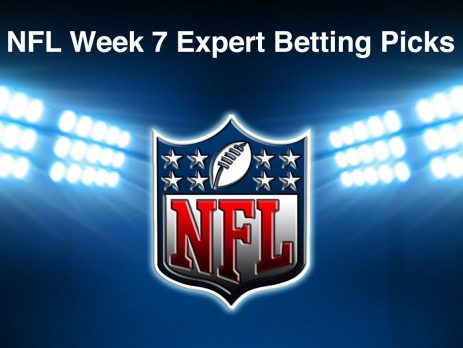 Before getting into the NFL Week 7 Expert Betting Picks, there are a few stat lines you need to know for the upcoming set of games. For example, the Minnesota Vikings are the only team with a perfect pace against the spread this season.

The Oakland Raiders are perfect beating the sportsbooks when playing on the road. And finally, Geno Smith will be the quarterback of the NY Jets this week against the Baltimore Ravens. It means all bets should go to the purple team.

Those are a few bookie tips, and these are the NFL predictions to look forward in week 7:

The Titans finally won a home game after beating the Cleveland Browns last week.  It was just their second home victory over the last two seasons. Their success has come via their defense and the running game. Tennessee’s defense has allowed only nine touchdowns this season.

They have been particularly good sacking quarterbacks. The Titans have 18 sacks this season, which is the 5th best number in the NFL.

The Colts, on the contrary, have been awful protecting their quarterback. Andrew Luck has been sacked 23 times over six weeks. No quarterback has received more punishment this season than him. It seems like it’s a bad matchup for Luck wherever you see it.

However, in his career, Luck has dominated the Titans. He has won the seven games he has played against Tennessee, despite throwing ten touchdowns and seven interceptions.

I see Luck failing this time.  The Titans are growing each week, and they will show it on Sunday. Take the Titans to win but the Colts to cover.

The problem of taking action bets on the New Orleans Saints in consecutive weeks is they don’t play as well on the road as they do at home.  The sports betting agents know it, and they adjust to it.

The Saints are great moving the ball, but they are unbalanced. They have the best passing offense in the NFL, yet also the fourth worst rushing attack. New Orleans also scores 31.0 points per game which it is the second-best number in the league.

However, they also allow 33.6 points per game; the worst mark in professional football. The NFL betting fans that follow the Saints must go crazy with those numbers.

It’s going to be hard for New Orleans to beat Kansas City. The Chiefs smacked the Raiders last week with a 26-10 week. The problem about betting Kansas City is they don’t have a good enough offense to beat the Saints by more than a touchdown.

The Chiefs averages 21.8 points per game. Don’t get me wrong they will win because they are better overall. But, the Saints have a potent offense which will keep this game close.

The pay per head sportsbooks will expect a heavy load of bets going the Patriots way this weekend.  Sadly for football fans, the Pittsburgh Steelers won’t have QB Ben Roethlisberger due to a knee injury. To be fair Ben has a losing record against the Patriots. He’s 3-5 on his career despite his 17 touchdowns and six interceptions.

QB Tom Brady, on the contrary, has made Pittsburgh fans pay each time. Brady is 6-2 against the Steelers with 22 touchdowns and just three interceptions. Since returning from suspension, the Patriots quarterback has been untouchable. He has thrown 782 yards, six touchdowns, and zero interceptions in the wins against the Cleveland Browns and the Cincinnati Bengals.

The Patriots have been incredibly profitable this season. They are 5-1 against the spread this season and have scored 34.5 points per game since the return of Brady. Their matchup against the Steelers is particularly good for New England. Pittsburgh has the 29th total defense in the NFL.

The Steelers haven’t been great pressuring quarterbacks either.  They have recorded only eight sacks this season; only two teams in the NFL have been worst at it this year.

The Broncos have dropped the last two in a row because their offense has been a no-show.  The defense can’t carry them on every week and the team found out the hard way last week in their loss to the Chargers.  Nevertheless this week, the defense is the crucial point of a probable win and pay per head sites will plan on it.

Denver will face a guy that bailed on them during the offseason. QB Brock Osweiler took a $72-Million offer from the Houston Texans to leave the Broncos hanging at the quarterback position.

The Broncos are ready to give Osweiler a welcome back to Mile High treatment. "It’s Brock. We know Brock. He came from here. And we want to kill him. That’s just what we want to do”, explained the Broncos LB Brandon Marshall this week.

Denver leads the NFL with 21 sacks this season.  They will gladly add a few more in the name of Osweiler. Since leaving Denver for Houston, Brock hasn’t been any good at his job. His team is 4-2, yes, but not because of him.

Osweiler has completed only 59.0 % of his passes for 1402 yards. He has scored eight touchdowns and has been intercepted another eight times. Against lesser defenses the Texans offensive line has permitted 12 sacks on Osweiler this season.

Expect the number to go up after facing the brutal savage Broncos defense.