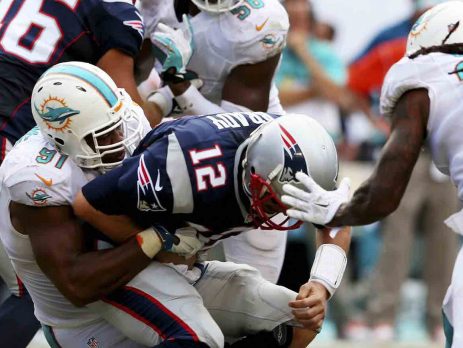 Betting on football is complicated. Let’s be real. But betting on the NFL during the week 17 is the ultimate challenge. Most teams are either eliminated or qualified to the playoffs. Several coaches have been fired already. Nobody can tell which teams will fight to the end or instead are already thinking about next season or the upcoming vacations.

The meeting between the New England Patriots and the Miami Dolphins has two playoffs teams clashing in the last week of the regular season. Miami won’t win much with a victory.

New England needs a win to secure the AFC top seed. If they lost to the Dolphins and the Oakland Raiders beat the Denver Broncos, the Pats will be the second seed.

Don’t expect New England to rest any of the starters. They smacked the NY Jets 41-3 last week and will try to do the same with Miami.

The Dolphins beat the Buffalo Bills to clinch their first postseason berth since 2008. Miami will love to enter the playoffs beating the best team in the AFC.

There is a lot in play for the New England Patriots. Despite they are already qualified for the playoffs, and they have clinched the AFC Title for an eight time in a row, the top of the AFC could slip away. With a Patriots win, they will be the first seed in the AFC. Plain and simple. The problem is they have lost the last three visits to Miami. They need to take this one seriously.

"We got on [the] airplane and said, ‘Look, we’re finishing strong. We’re putting the pedal to the metal.’ Last year we didn’t finish strong, and we didn’t’ like the way that things ended," QB Tom Brady explained this week. "We need to keep playing well down the stretch. We’ve got to try to finish strong through next week."

The Patriots have been money this season. They are 13-2 straight and 12-3 against the spread. They have won six straight games. And playing on the road, they posted a great 6-1 ATS record. The pph sportsbooks keep making New England favorites by larger margins. They keep failing to collect.

New England will look to finish the season with an 8-0 away from home record for the second time in franchise history. The only time it happened was in 2007 when they ended with an undefeated season.

The Patriots offense can score any way they want to. They average 268.8 passing yards per game which is the fourth best number in the NFL. But they also average 116.8 rushing yards per game; it is the 8th bets number in the league. RB LeGarrette Blount set a franchise record with 17 rushing touchdowns this season.

Miami’s defense has improved a lot over the last month, but they are no match for the Patriots offense. Miami is 4-8-1 ATS in its last 13 games when playing New England, according to the NFL betting trends.

The Miami Dolphins don’t have anything meaningful to fight for in week 17, but their approach to this game should be an interesting one. "We have an opportunity to play after Week 17, but our main focus is this week," Dolphins head coach Adam Gase said. "We’re going to stick to our plan that we’ve had this entire season of not looking past the opponent that we’ve had ahead."

Miami already qualified for the postseason, but they don’t have a clue where and who they will be playing against in the wildcard round. Teams usually have two approaches on this type of scenarios. They either play the starter trying to keep the winning pace but risking an injury. Or they sit the starter to have a “bye week” before the playoff start.

I expected the Dolphins play the starters in the first half, but no so much in the second. They already lost QB Ryan Tannehill to an injury, and they can’t afford much more. The second team, however, could give the Patriots some headaches. Remember to beat the bookie business the Dolphins need to lose by 9 points or fewer. They have a wide margin with this big NFL spread.

How to bet the Game Total in the New England Patriots vs Miami Dolphins NFL Week 17 Matchup:

There are different ways to see the over/under results for the season for both the Patriots and the Dolphins. New England averages 26.9 points per game, which is the 5th best mark in the league. But nine of their 15 games went UNDER the game total this season. What is the reason? The per head sportsbooks usually inflate the total for the Patriots’ games.

Miami, on the other hand, averages 23.3 points per game; the 16th best number in the NFL. The Dolphins have seen 11 of their 15 games gone OVER the game total this season. The price per head services‎ usually set the game total with a low number.

When talking about the game between the Dolphins and Patriots, the series has a unique tone when the game is in Florida. The total has gone UNDER in 6 of Miami’s last nine games when playing New England.

NFL Week 17 Odds and Picks New England Patriots at Miami Dolphins: Take the Dolphins with the points and the UNDER.