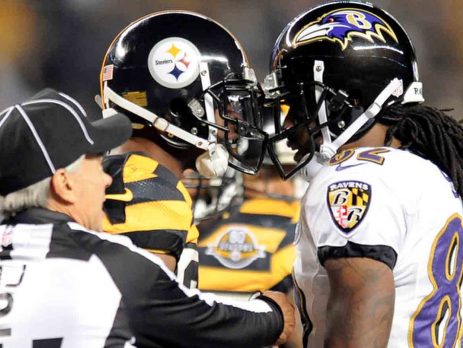 There are several rivalries in the NFL, but perhaps none like the Baltimore Ravens and the Pittsburgh Steelers. Believe me, on Christmas Day they will exchange everything but presents. The stakes are high on this one. The AFC North division title is on the line. The loser could end up out of the playoffs. It’s the second meeting of the season. There is plenty to talk about.

Baltimore is 8-6 straight up and 6-8 against the spread. They barely beat the Philadelphia Eagles last week with a 27-26 score. The sports bookies know the Ravens need this one.

Pittsburgh is 9-5 both straight up and against the spread. They came back to beat the Cincinnati Bengals 24-20 last week. A second lost to the Ravens could put their playoffs chances in jeopardy.

The Baltimore Ravens won the first meeting this season with a 21-14 score. They have the mental upper hand over the Steelers. I know in a rivalry it doesn’t serve much, but it can’t hurt to know you already beat the upcoming team.

The pay per head bookies can’t expect a high scoring game. Both teams have Super Bowl winnings quarterbacks, but this rivalry is run by the defenses. Statically, the Ravens defense is better. They will hold on to it to try to win this game.
Baltimore owns the 5th best total defense in the NFL.

Just a few weeks ago they were the best. After meeting Tom Brady and the New England Patriots they fell off, but who can blame them? The Ravens allow 18.8 points per game, which is the 7th best number in the NFL.

They held the Steelers to just 14 points in the first meeting of the season, and they look to do it again.

How do you stop Pittsburgh? You focus on their running game. If you stop RB Le’Veon Bell, you have won half of the battle.  Bell destroyed the Buffalo Bills two weeks ago, running for a franchise-record 236 yards and three scores. In the first meeting against Baltimore, Bell was nowhere to be found. He ran for 32 yards on 14 carries. The Steelers offense never went off.

The other half is stopping WR Antonio Brown. That’s obviously a more difficult task, considering Brown is close to an unstoppable force outside the numbers. Brown already has 1188 receiving yards this season; the third best number in the league.

The pay per head sportsbooks are scared of what Antonio Brown can do to defenses. The Ravens will keep an eye on him, but it might not be enough.

To say the Pittsburgh Steelers are on fired is an understatement.  They have won their last five games in a row and currently lead the AFC North division. They are heating up just at the right time. It will be hard to see the online bookie software making them underdogs in any game from now on.

The Steelers last five wins were over the Cleveland Browns, Indianapolis Colts, NY Giants, Buffalo Bills, and Cincinnati Bengals. Of those five teams, three of them were truly fighting for a playoffs spot. And other than the game against the Bengals, none were actually close games.

Pittsburgh needs to burn the Ravens secondary. I already mentioned Antonio Brown has no match outside the numbers. But QB Ben Roethlisberger needs to find other weapons to torched Baltimore’s defense. Brady and the Patriots showed it could be done.

The play is to attack either the middle of the field with short routes or outside the numbers with Browns. It’s easier to say than make it happen. But Pittsburgh is trending up at the right time.

How to bet the Game Total in the Baltimore Ravens NFL Week 16 Matchup:

I told you already. This rivalry is run by the defenses. Even if the Steelers defense is not what it used to be. It is not a surprise the total has gone UNDER in 4 of Baltimore’s last six games when playing Pittsburgh. The first meeting of the season in Baltimore saw both teams scoring 35 points; the game total was set at 36.  For this game, the total is at 44 points by the price per head sportsbook.

Baltimore scored 21.9 points per game overall. The Under is 5-1 in Ravens last six vs. AFC North teams, 5-1-1 in their last seven games in Week 16 and 4-1 in their last five road games vs. a team with a winning home record.

Pittsburgh can score a lot of points faster than anyone in the NFL. The problem is they also can go in long droughts if they find a bad matchup. Only four of the 14 games this season has seen the Steelers hit OVER.

These two teams know each other too well. Not only do they meet twice a year, they usually meet either for a playoffs spot on the line or even in the postseason. This is a bad blood rivalry matchup. There is more than just bragging rights on the table. None will give away an inch.

NFL Week 16 Odds and Picks Baltimore Ravens at Pittsburgh Steelers: Ravens +5 and the UNDER.