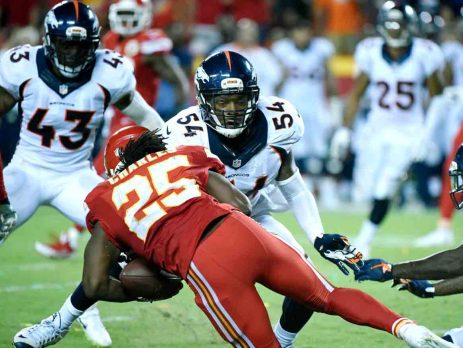 A lot will be on the line when the Denver Broncos and the Kansas Chiefs meet on Christmas day. For the Champs is a must-win situation after losing the last two. For the Chiefs, it’s about respect.

Denver failed to win against the New England Patriots last week with a 16-3 result. They are 8-6 straight up and against the spread. The problem is if the season finished today, they would be out of the postseason.

Kansas City lost at home to the Tennessee Titans 19-17 last week. They dropped to 10-4 SU and 7-7 against the spread. They lost the second place in the AFC. The pay per head bookies made them 3.5-points favorites to bounce back.

We have forgotten about it, but the Broncos are still the Super Bowls Champions. I get their 8-6 record is far from impressive. And yes, they have lost two in a row, but they still deserve some respect. Denver needs to win out against the Chiefs and the Raiders. And with a bit of luck, they will be in the postseason.

The sports betting agents have no respect over their offense. Who can blame them? But their defense still is legit. The Broncos held Tom Brady and the New England Patriots to just 16 points last week. Denver lost the game, but it wasn’t because of their defense.

The Broncos defense has bailed out this team week in and week out. Their pass rush is the best in the NFL with 40 sacks. Their secondary defense is almost impenetrable. It was proven last week against the Patriots.
Several reports said there was a confrontation between the Broncos defense and offense after losing to New England.

"I definitely understand their frustration," Broncos offensive tackle Russell Okung said afterward. "They played well enough to win, and they held that team to 16 points, which a lot of teams don’t do. We’re an emotional team; that’s what makes us so good. To me, that’s part of who we are.

"When our defense is out there, they’re an emotional group, and they hold themselves to a high standard. As an offense, we need to do the same. So, I think [their frustration] is warranted. We’ve got to be better."

The one thing no one can deny is the team cares. They might be having problems, but they haven’t checked out. The per head sportsbooks still expect the Broncos to show some life in the last two games of the season.

The Kansas City Chiefs have a lot to show after losing at home to the Titans. Their defeat is exactly why nobody takes them seriously when taking about the Super Bowl contender. That home loss is the reason price per head services‎ don’t put the Chiefs as favorites to win it all.

They played conservative, uninspired football after going 14-0 up on the scoreboard. They looked predictable and sometimes afraid to take chances. They can’t show that same image against Denver, or they will lose again. In the first meeting at Mile High, the team played aggressive in the fourth quarter and won the game. Their conservative style won’t take them anywhere.

Last week WR Tyreek Hill touched the ball once for a 68-yards touchdown. Then the offense never looked for him again. Expect Hill to have a bigger role against the Broncos. Hill’s speed has no match in the NFL.

If the Chiefs want to show they are a true Super Bowl contender team, they need to win this game and sweep the Broncos. Otherwise, they will enter the playoffs with doubts coming from all over the place.

How to bet the Game Total in the Denver Broncos at Kansas City Chiefs NFL Week 16 Matchup:

The game total set by the pph sportsbooks is the lowest of the NFL week 16. The online bookie software made the total 37.5 points for the Chiefs and the Broncos. It’s awfully low for two teams who are in the playoffs picture. But the reality is both are built somehow similar.

The Broncos defense carries with their offense. I can say the same about the Chiefs; even if the difference between the defense and the offense is no so dramatic. The total has gone UNDER in 4 of Kansas City’s last six games when playing at home against Denver. With the 37.5 points, the price per head sportsbooks is just trying to get action bets on both sides.

Denver issues are directly linked to their quarterback playing and their lack of running game. QB Trevor Siemian has thrown one touchdown in the last two games. His quarterback rating against the Patriots was a weak 73.1. Their running game didn’t help either. As a team, they ran for 58 yards against New England.

Kansas City’s issues are more of their play calling plans. They are just too conservative. It fits the style of QB Alex Smith, but it’s not the path to a Super Bowl.  The UNDER is 8-2 in the Chiefs last ten games overall, 39-17 in their last 56 games as a home favorite, 38-15 in their last 53 home games, and 5-1 in Chiefs last six vs. AFC teams.