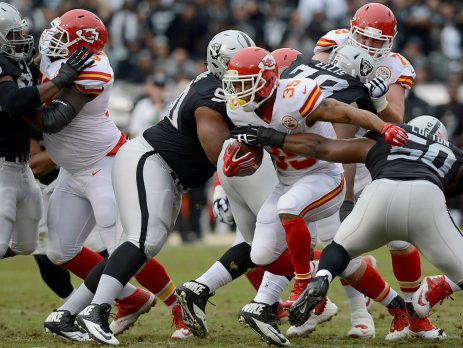 The NFL Week 14 Thursday Night Football meeting between the Oakland Raiders and the Kansas City Chiefs if a playoffs game in the regular season. It’s not a life or death situation, but it will shape the rest of the campaign for both teams.

Oakland is currently on the drivers’ seat in the AFC. Their 38-24 victory over the Buffalo Bills gave them the top seed back. The problem is they will finish the season with three divisional road games, including this one.

Kansas City is one game down, but that’s ok. The Chiefs already beat the Raiders this season. Meaning on Thursday if they win they will have the upper hand in case their record is the same.

The winner of the matchup on TNF could end up with a bye week in the playoffs. That’s why the price per head sportsbook sees this AFC West matchup as close as it gets.

We need to get used to the fact that the Oakland Raiders are a good football team. In fact, they are an excellent football team. They currently lead the AFC with a 10-2 record. They are unbeaten away from home and could end up as one of the top seed in the American Conference if they stay on this path.

The pay per head bookies need to take the Raiders seriously. Oakland is a lot to handle, especially on the offensive side. Because their offense is so good, it’s not a surprise they scored 29 unanswered points against the Bills. They were down by double-digits, and quickly they erased the deficit.

Oakland averaged 28.8 points per game, which is the third best number in the NFL. However, they have scored 36.5 points in their last two victories. Their defense allows 24.9 points per game. It’s not great but its good enough to keep winning.

The pay per head sites knows the Raiders 3.9 point differential could be an issue in the playoffs, but not right now. During the regular season a team which such a powerful offense will do just fine.

The Raiders will enter this game with an 8-4 against the spread record. On the road, they are unbeaten straight-up and against the spread. Their best win away from home was against the Baltimore Ravens. A victory over Kansas City should change the minds of every doubter out there.

Like the Raiders, the Chiefs are not taken all that seriously. They have been a consistently winning football team since head coach Andy Reid came from Philadelphia. But they haven’t done enough to win during the playoffs.

Their currently regular season shape has them winning seven of their last eight games. The only loss during that span was a bizarre 19-17 defeat at home against the Tampa Bay Buccaneers. The price per head services‎ made Kansas City a field goal favorite for this game. Kansas City won the first meeting in Oakland with a 26-10 result. However, this time both teams seem to be playing at an exceptional level at the same time.

Unlike the Raiders, the Chiefs are not praised for their powerful offense. In fact, their offense could be the unit holding them back. Kansas City averages 23.3 points per game, 15th best in the NFL. Yet, their defense only allows 20.2 points per game; 9th best.

The one thing the Chiefs have going their way is the rehabilitated pass rush. They had a tough time getting to the quarterback in their first two months of the season.

Since the return of DE/OLB Justin Houston things have changed. With Houston in the lineup, they sacked the Denver Broncos QB Trevor Siemian five times in week 12. They added another couple sacks to QB Matt Ryan this past week in their meeting with the Falcons in Atlanta.

If Kansas City wants to keep their domination over Oakland, they need to get the Raiders QB Derek Carr often on Thursday Night.

How to bet the Game Total in the Oakland Raiders at Kansas City Chiefs NFL Week 14 Matchup:

At this point in the season, we know the Raiders and the Chiefs have been successful in 2016. We also know they get to that success in very different ways. While Oakland will play aggressive almost on every down, the Chiefs are a conservative football squad, which doesn’t make many mistakes.

Here’s how aggressive the Raiders are on offense. Nine of the Oakland’s 11 games this season have gone OVER the game the total. Five of their last six victories surpassed the 50 points in a game mark. They score and allow points on a consistent basis. Their games are fun and thrilled for the fans. In their last two wins, they played games of 67 and 62 points as a total.

It should not be a surprise the game total is at 47.5 points. The Raiders force teams to play their way. They force teams to try to keep up with their scoring. That’s why the meeting on Thursday is marvelous. Mostly because Kansas City gets to their success in an entirely different way.

The Chiefs are a fundamental team. They will do things the right way. Just like the playbook say it should be. This season, the action bets have seen Kansas City ended up UNDER the game total in eight of their 11 meetings. They don’t care about scoring.

They care about winning. QB Alex Smith is one of the best game managers out there. He won’t put his team in bad shape. Instead, he will take care of the football. Even if it means exchanging field goals instead of touchdowns.