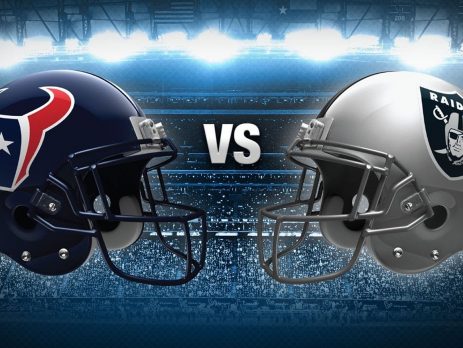 The Oakland Raiders waited over a decade to return to the NFL playoffs picture. They will go at it against the Houston Texans. It’s not a sexy matchup, but it will open the NFL wildcard weekend in the AFC.

The Raiders finished with a 12-4 straight up record and 10-6 against the spread this season. Winning 12 games is a remarkable achievement, but without QB Derek Carr available their chances are slim. It was proven by the 24-6 loss to the Denver Broncos last week.

The Texans won the AFC South division but at unimpressive pace. Their 9-7 straight mark along a 6-9-1 against the spread record doesn’t scare anybody. QB Tom Savage was ruled out for this game due to a concussion. QB Brock Osweiler will lead the way. Houston’s fans hate Osweiler which will make this game fun to watch. It could be a track wreck under center.

These are the NFL Playoffs Wildcard Round Odds & Picks as the Raiders Take on the Texans:

I get the most Raiders fans are sad because they lost their starting quarterback just two weeks before the playoffs. It sucks. I said it. But they still have a shot at winning their first playoffs game since 2002.

The pay per head service is struggling to find how Oakland will perform on offense. After all, they will have a rookie QB under center in Connor Cook. The problem is not having Cook for this game; it’s he will start his first ever NFL game in a playoffs matchup. It’s the first time in the league history it happens.

The Raiders averaged 253.2 passing yards per game in 2016, but that’s out of the window. Oakland can’t only go where RB Latavius Murray takes them. Murray had only two games this season over 100-rushing yards. To be fair, his team runs a passing offense first, but Murray needs to step up in this game.

"We can’t play that way. Point. Blank. Period. Especially in the playoffs. Or we’ll be home watching with all the other teams", Latavius Murray said about the Raiders’ effort in the 24-6 loss in Denver.

Oakland needs to step up also on defense. The online bookie software made Oakland only 3.5-points dogs in this one despite not having their starting quarterback. What is the reason? The Texans have also quarterback problems.
Houston will start their $72-Million quarterback Brock Osweiler.

He struggled supremely this season. Osweiler completed only 29% of his passes with 15 touchdowns and 16 interceptions. If the Raiders get to Brock, he will make mistakes. Oakland’s pass rush is another key to this matchup.

"Win or go home, so it’s … time (to step up), man", LB Khalil Mack said. "Getting ready to go down there and have our best game of the year."

The Texans suffered a crushing home loss to the Kansas City Chiefs in the playoffs last season. They went and got QB Brock Osweiler thinking he was the missing piece. Brock will have a very nice shot to win this game considering the Raiders defense is a bad one.

Oakland has the 26th best total defense in the NFL. Their passing defense was bad, allowing 258.0 passing yards per game. However, their main issue comes when they need to sack quarterbacks. The Raiders recorded a league’s low 25 sacks this season. If their pass rush can’t get to Osweiler, they have no shot.

Keep in mind Brock doesn’t have to do much. He just needs to avoid stupid mistakes. Houston owns the best total defense in the NFL. They can stop both the pass and the run. They have the upper hand in almost every matchup available. The pph sportsbooks are clear the Texans are not better than the Raiders if QB Derek Carr was available, but he’s not. Houston has the edge.

How to bet the Game Total in the Oakland Raiders at Houston Texans NFL Week Playoffs Wildcard Round:

The game total set at 36.5 points by the sports bookies is the lowest of the weekend in the NFL. I already mentioned both teams have serious quarterback issues. Moving the ball on a consistent basis will be a struggle on Saturday.

The problem about betting the UNDER is the total is just too low. With a weak 20-17 result the OVER will hit the cashier of the pay per head sportsbooks. On any other weekend, that’s a low scoring affair.

Eleven of the 16 games went OVER the game total for Oakland. Instead, only six of the 16 surpassed the number for Houston. Consider, the total has gone OVER in four of Houston’s last five games when playing Oakland.

NFL Playoffs Wildcard Round Odds & Picks: Expect a close game that should open up offensively in the second half to cash the over. Houston should win this one, but Oakland has the team to give a good fight. Take the points. Take the Raiders +3.5.