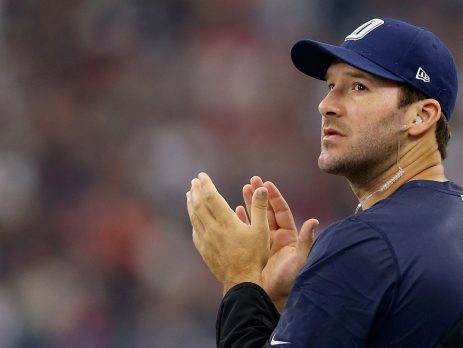 NFL Network reported the marriage between Tony Romo and the Dallas Cowboys will end on Thursday. Romo will become an unrestricted free agent, allowing him to negotiate with any of the 32 teams in the league.

When healthy, Tony Romo is a Top-10 quarterback, and many franchises will be exploring the possibility to get him in the Free Agency. Romo is 36-years old, but he has only played five games in the last two seasons. The health is an issue.

His career has been volatile at best. The talent is there, and so are the numbers but not the postseason wins. Romo will finish his Cowboy’s career with 34183 yards, 248 touchdowns, and 117 interceptions. He had a career 97.1 passer rating, which is not bad at all.

The issues come in the playoffs. He has a 2-4 postseason record with eight touchdowns and two interceptions. The problem is he never got to a Conference final. With that said, many teams will be happy to have him in the last seasons of his career.

This is clearly the best fit for Tony Romo, and the pay per head services know it. The Broncos have a veteran roster ready to resume success. They played hard last season but were one quarterback short from making it to the playoffs.

Romo can do what Peyton Manning did in Denver. Command a talented offense and let the defense do the damage. Tony is looking for a team that can give him a shot at the Super Bowl. At this point, the AFC has the New England Patriots as the dominant force, and a couple of steps behind are the Pittsburgh Steelers. After that is an open field.

Romo could match with two great wideouts in Demaryius Thomas and Emmanuel Sanders. There isn’t another team in the NFL who can give him this talent.

I get that the Houston Texans gave this stupid crazy contract to Brock Osweiler last season, but they need to swallow their pride and make a move for Romo. They know it. We know it. And the price per head sportsbooks know Osweiler is not the guy who can take this team to the Super Bowl. The money already went to the drain. So they might as well just take a veteran to solve many of the offensive problems.

Houston had the number one overall defense last season. They had very little offense mostly because Osweiler was awful. Romo will make them a contender in the AFC right away.

The Chiefs said they are set at the quarterback position. They trust and believe Alex Smith could take them to the promise land. However, many are skeptical, including me. Smith’s short passing game hasn’t even reached a Conference final. With the chance of having Tony Romo in a good offense, Kansas City could make a big jump toward a Super Bowl appearance.

The Bears are moving on from QB Jay Cutler. They need a good quarterback to have a shot in the NFC North. The problem is selling this idea to the Romo camp. Chicago would have to fight against Green Bay and Minnesota, who look solid in the division. Detroit is not bad either. Romo doesn’t have enough time to sign up for a project. He needs a team willing and ready to win. The pay per head bookies will be shocked if Romo decides to go to the Windy City.

Why are the Cowboys on the list they are just releasing Romo? Well, they could sign him back for the right price. What happened in Dallas is Tony Romo became too expensive to be a backup quarterback to Dak Prescott.

The Cowboys understand Prescott’s value, but they still are unsure if he’s a one-year wonder. The relationship between Romo and owner Jerry Jones has been a special one for years. For Jones, it would be hard to see Romo in another uniform. This could happen, for the right price. But it remains a long shot.

The Nine are a long shot as well. They are arguably the worst team in the NFL and the one with less talent on their roster. San Francisco, however, has a lot of money to spend in the Free Agency. Romo can get a huge offer from them. They can also pursue new talent adding veteran players to help Romo on the offensive side. For example, several reports mentioned they struck a deal with WR Pierre Garcon. If they can make a couple of more moves like that one, they can allure Romo to stay in the Bay Area.

The Buffalo Bills restructure the deal of QB Tyrod Taylor. At this point, Taylor remains the number one option under center, but the online bookie software sense this could chance soon. Buffalo is trying to attract Tony Romo to get to the playoffs for the first time since 1999.

The Bills had the best rushing attack in the NFL in 2017. Buffalo will give the ball to their tailback LeSean McCoy and allow Romo to do just enough to win. Tony won’t be the centerpiece of this offense.

Even if the Dolphins have QB Ryan Tannehill under center, they are intrigued by the possibility to have a player like Tony Romo leading the offense. The sports betting agents have Miami as a long shot, but even so, they remain in the conversation.

This only tells me the Front Office doesn’t really trust Tannehill to be a top ten quarterback. Unlike Andrew Luck and Russell Wilson, two quarterbacks of his same draft class, Tannehill hasn’t shown anything the Dolphins can be excited about. I’m not saying they are ready to move on. But if Tony is available they will explore the option for sure.

The Jets are not a real contender in the Tony Romo sweepstakes. Listed 30/1 at per head sportsbooks, New York is not an appealing destination for the veteran quarterback. They lost WR Brandon Marshall and cut CB Darrelle Revis. They don’t have a plan on offense or a good defense to carry them. And their coach Todd Bowles is quietly on the hot seat.  If Romo is thinking playoffs Super Bowl rings, this is not the place for him.