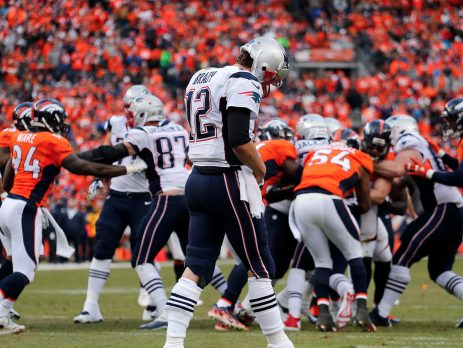 The New England Patriots and the Denver Broncos have a very heated rivalry. Both are the last two Super Bowl Champions, and both have a relationship of respect/hate to each other. The sports bookies know this is the best game of the 16 set for the NFL week 15. There will be a lot of action bets on this meeting.

For Denver is a must-win situation at home. They lost to the Tennessee Titans with a 13-10 result last week. They still are in the wildcard seed, but another loss will drop them. They still will face the Oakland Raiders and the Kansas City Chiefs in the upcoming games. If they don’t beat New England, it won’t matter what happens next.
For New England is about respect.

They lost in the AFC Championship game in Denver in two of the last three seasons. They need to win this game to send a message to the rest of the NFL. The reality is they will have home-field advantage in the playoffs, but a win here will solidify their expectations going into January.

The 30-23 win over the Baltimore Ravens was a statement win by the New England Patriots last week. We mentioned the Ravens give the Pats problems and that’s why taking the points was the play. It happened, but it wasn’t easy.

The Patriots’ showing on Monday Night was a complete domination. Although the result was a close one, the game wasn’t. The pay per head sportsbooks are clear New England is the best team in the AFC. They are currently sitting on top of the AFC with an 11-2 record. And after dismantling the Ravens, they left no doubt.

New England is missing TE Rob Gronkowski for the rest of the season. He’s done for the year with a back injury. He was not missed by QB Tom Brady on Monday Night. Brady threw for 406 yards and three touchdowns against the best total defense in the NFL. He was in control. He was poised. And he looked unstoppable.

Now he will play the team that gives him the most headaches. The Broncos eliminated the Patriots last season in the AFC Final. Tom Brady threw two interceptions and was under pressure on every snap. The problem for Denver is New England’s offensive line looks better now. And the Broncos defense is beatable at this point in the season.

Denver has lost three of their last five games. Their offense has struggled on a consistent basis. QB Trevor Siemian is anything but impressive. It seems like they don’t have the tools to compete in this game. That’s why the pph sportsbooks are not giving the Champs any respect.

I know I mentioned the Broncos had struggled offensively this season but in two of the last three losses they scored 27 and 20 points. Curiously it was their defense who let them down. If Denver manages a way to score 20 points against New England, they will be in the game. In the end, the success of the team won’t fall on the offense. It’s all about the defense.

“Respect to Belichick, but hey, I think we proved last year that we’ve got some tricks, too. That’s what makes football the best. This game is deeper than it might appear. For every style of football, there’s a counter”, said LB Von Miller about facing the Patriots this week.

Von Miller is the key to all the Broncos do. He has 13.5 sacks this season and is the favorite to win the 2016 defensive player of the year award. He’s just a machine coming from the outside. He disrupts any offensive game plan, and the Patriots know it.

Knowing that New England passes the ball more than they run it, the personnel the Broncos have on defense is perfect to play Tom Brady. Denver can rush the passer on every down, and the secondary is one of the best in the NFL.

How to bet the Game Total in the New England Patriots at Denver Broncos NFL Week 15 Matchup:

The online bookie software set the game total at 44 points. Last season, in the AFC Championship game both teams scored 38 points. The sports betting agents see a similar game. It will be a chess match between the Patriots offense and the Broncos defense. But like last season, the game could be won or lost by Denver offense and New England defense.

The Patriots score 26.7 points per game, which is the 5th best mark in the Nation. The Broncos allow 18.6 points per game; it is the 6th best. As mentioned, the strength of Denver’s defense comes in the pass rush. They have the second-best pass rush in the NFL with 38 sacks this season. Only Carolina with 39 has a better number.

Denver is a defensive team. They win because of the defense. It’s not a surprise the UNDER is 7-3 in Broncos last ten games overall, 5-1 in their last six games in December, and 5-1 in Broncos last six home games vs. a team with a winning road record.

New England is an offensive team, but like many, they slow down when playing on the road. The UNDER is 7-1 in Patriots last eight road games, 6-1 in their last seven games as a road favorite, and 7-0 in Patriots last seven games on grass. Keep in mind the price per head services‎ know the total has gone UNDER in 4 of New England’s last six games when playing on the road against Denver.

New England Patriots at Denver Broncos NFL Week 15 Picks and Odds: Broncos +3 and the UNDER.