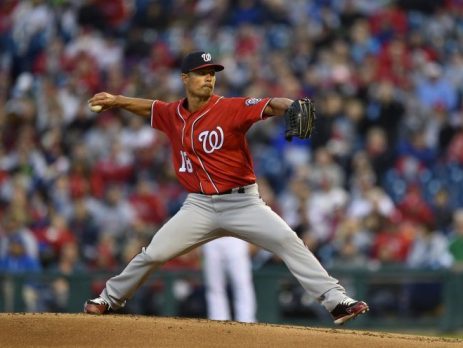 In that game, Guthrie failed to get out of the first inning, allowing 10 runs on six hits in 2/3 of an inning pitched. Washington designated Guthrie for assignment the following day, with the pitcher making the decision to return home instead of report to Triple-A Syracuse.

“My family was in Philly for the game, and when I got back to the hotel, my wife and I plopped down on the bed,” Guthrie wrote. “We just kind of sat there for a while not saying anything, but after a few minutes, she asked me how I felt.

“I started crying. I hadn’t cried in the clubhouse after the game, or on the bus ride to the hotel, but being there with Jenny, and both of us knowing that it was over … that hit me hard. There was this immense feeling of sadness that came over me.”

Guthrie made his major league debut in 2004 as a member of the Cleveland Indians, pitching sparingly in his first three seasons before moving into the starting rotation with the Baltimore Orioles in 2007. Guthrie played five seasons in Baltimore, putting together a record of 47 wins and 65 defeats with a 4.12 ERA. Guthrie struggled to start the 2012 season as a member of the Colorado Rockies, but a move to Kansas City in the middle of that year served as a key spark in his career.

In three-plus seasons with the Royals, Guthrie went 41-34 with a 4.38 ERA, even starting Game 7 of the 2014 World Series against the San Francisco Giants. Guthrie and the Royals would lose that one, but they came back the following year to defeat the New York Mets in five games.