The NHL first round playoffs start this Wednesday. Eight series in the first round suggest there will be plenty of action to get behind the puck. If you haven’t watched much hockey this season, don’t worry about it. Let’s look at each first-round series for the 2017 NHL playoffs:

Despite the season series ended in a tie, Pittsburgh took the mental upper hand by beating Columbus 4-1 just early this month. Of course, overall the Blue Jackets outscored the Penguins 13-10 during the season after smacking them 7-1 in December.  But Pittsburgh is not worried about it.

The Penguins led the NHL in goals scored per game, averaging 3.4 goals per game while Columbus averaged 3.0, sixth best in the league.

The Blue Jackets goalie Sergei Bobrovsky leads the league with a .933 save percentage. He is going to win the Vezina for the second time. The pay per head bookie know Columbus has the advantage in this department.

Washington can’t afford another early exit after finishing with the best record in the NHL. After several disappointments, the Capitals are ready to make a serious run to the Stanley Cup. The price per head sportsbook makes a big deal of the fact the Caps got the best player available at the trade deadline in defenseman Kevin Shattenkirk.

Toronto also is dealing with the injury of goalie Frederik Andersen. He left Saturday’s game against Pittsburgh. He’s expected to start Game 1, but this could be an immediate issue in the series.

The Maple Leafs are a great story this season, but the Capitals are no joke this time. There is not sense they will choke this season.

After missing the postseason, the Senators return to the playoffs with high hopes to advance to the season round. The sports bookie software made Ottawa the underdog, but they match up well against Boston.

Ottawa had a three-game winning streak going before losing in the last game of the regular season against the Islanders. The Senators are not a great team in any stats department, but as mentioned they are perfect when facing the Bruins.

Boston missed the postseason over the last two years. They will be led by RW Brad Marchand, who had a career year with 39 goals and 46 assists in 80 games. Defenseman Torey Krug suffered a lower-body injury. If he misses the first games of the series, Boston could find themselves in a early hole.

This is a special one for goalie Carey Price and the Canadiens. Price is looking like a machine defending his net, and he will get a chance to revenge the 2014 loss.

Montreal also has the upper hand as they swept the season series 3-0-0, outscoring the Rangers 11-7 in those games. The Canadiens base their success on defense. The pph sportsbook expects them to keep this path, allowing 2.4 goals per game.

The Rangers average 3.1 goals per game, but they didn’t have a playmaker that stud out from the rest.

The Blues are trending in the right direction. But even so, the online bookie software made them the underdogs in this series. Since March, St. Louis won only 15 of their last 19 games.  Mike Yeo took over on February 1, and everything changed. They have a 21-8-2 record, and their defense improved considerably.

Minnesota gets to the postseason with four wins in a row. Winger Mikael Granlund is playing outstanding hockey with 69 points and center Eric Staal scored 28 goals. The Wild average 3.2 goals per game this season, the second-best number in the NHL. St. Louis ranks 12th in goals scored.

There is bad blood between Anaheim and Calgary. They went into a brawl the last time they met this month. The Ducks haven’t lost to the Flames in the last 25 home games. With a record like that home field advantage becomes a huge deal for the series and the betting software for bookies.

History says Anaheim has the upper hand in this series. The Ducks controlled the regular season with four wins in five games against Calgary. Anaheim has also won the two times these two teams met in the playoffs in 2006 and 2015.

Edmonton owns the best player in the NHL at the time. Connor McDavid is a phenomenon who scored 30 goals and recorded 70 assists.  McDavid claimed the Art Ross Trophy and will win the Hart Trophy as MVP. His greatness will be measured by how he handles his first trip to the playoffs.

The Oilers might have a great chance, knowing the Sharks ended the regular season by losing nine of 13 games. Edmonton also won the season series 3-1, including two wins against the Sharks in the last two weeks.

Despite the Blackhawks are the ultimate favorites to win the Stanley Cup, their first-round matchup against the Predators is one of the most entertaining series to start the playoffs.

Nashville won the first game of the season during the opening night only to lose the next four straight. The Blackhawks outscored the Predators 18-10 during the regular season. The Predators have been to the postseason for the third consecutive years, which mean they are not rookies at this stage. Yet, they haven’t played past the second round in the playoffs. 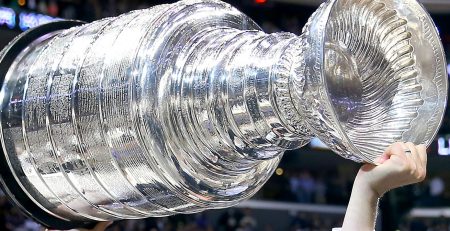 The Pittsburgh Penguins were not amongst the early favorites to win the Stanley Cup last season, but they reminded…