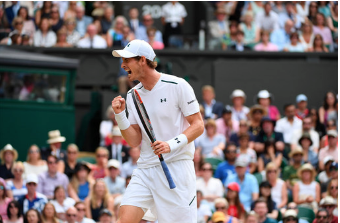 Rafael Nadal was bounced out of Wimbledon by Gilles Muller in a thrilling match that went nearly five hours. After Nadal battled back from a two-set deficit, a riveting see-saw fifth set went the distance until Muller ultimately won 6-3 6-4 3-6 4-6 15-13. Serves proved to be the difference, with Muller’s sliding left-handed serve presenting a serious issue for Nadal.
It was a match that was full of suspense and drama, including fans getting involved, but even Nadal’s will wasn’t quite enough to give him the win. He might have gone into the match a bit fuzzy after cranking his head on a door-frame, but that didn’t last long. Muller, however, seemed completely laid back throughout the match and even during his post-match interview. The pressure never seemed to get to him.

For Nadal, he lost a streak of 28 consecutive Grand Slam set victories in the first set, and when he dropped a second set in a row it proved to be too much. He had a career-high 23 aces throughout the set, and saved several match points throughout the fifth set. A visibly annoyed Nadal cited his slow start as the reason for the loss during his press conference, adding that he “didn’t expect this result.” Despite his frustration, fans hailed Nadal’s sportsmanship, praising him walking off with Muller and signing autographs.

On Muller’s end, however, he had the benefit of creating match point after match point through his serve. Every time it looked like Nadal was crawling back in to create a break of his own, Muller would crank back and overpower him with another 120-mph serve. The broadcasting team noted Muller’s cool demeanor after the match, wondering if his win had even set in yet. He didn’t look nearly as mentally exhausted as many of the fans did post-match.

The match did put a bit of a damper on Manic Monday, as Novak Djokovic’s match with Adrian Mannarino will be postponed until Tuesday. But for everyone but Djokovic and Mannarino, the match that they witnessed was worth it and should be remembered for a long, long time.