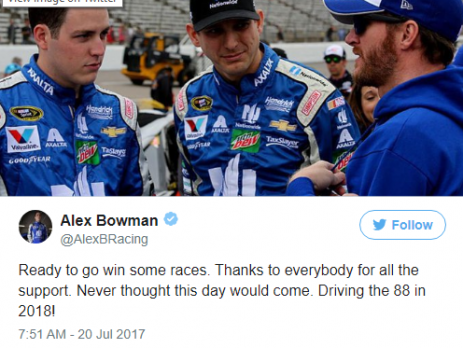 Bowman, 24, filled in in the No. 88 in 10 of the final 18 races last season as Earnhardt recovered from a concussion.

“He stepped up in a very demanding situation and showed that he can run with the best and compete for wins,” Hendrick Motorsports owner Rick Hendrick said in a statement Thursday. “His ability to stay focused through it all, and the way he’s handled himself since then, has shown a lot of character.”

He won his first career Cup pole at the 2016 Can-Am 500 at Phoenix Raceway last November. Bowman finished sixth and led a race-high 194 laps, both career bests, in a race he dominated until a late-race crash.

“We should have won this race,” said Bowman, who had three top-10 finishes in the 10 events.

His best finish in those seasons was 13th in the the 2014 Coke Zero 400 at Daytona International Speedway, where Bowman led a total of three laps.

“I saw on Twitter that I was released,” Bowman told The Arizona Republic about his departure from Tommy Baldwin Racing. “I guess he had to do what puts money in his pocket and I understand that.”

He hasn’t raced full-time in any of NASCAR’s three top series since 2015, although he has spent many hours in Hendrick’s race simulator.

Where’d he race before Cup?

Bowman, a native of Tucson, Ariz., started racing quarter midgets at 7 and had success as he worked his way up the dirt track racing ladder.

His transition to racing stock cars began more than six years ago and included two ARCA wins and NASCAR K&N Pro Series East rookie of the year honors in 2011.